A fetish figure from Africa is a statue or object which is said to have magical power, such as an amulet or talisman.

Protection from the Evil Spirits

Our fetish figures from Africa are said by the tribal people to keep away the evil spirits and to remind their homes of their ancestors.

Africans believed that the fetishes acquired power through the rituals of carving and consecration and magic words.

Some of the materials added for power are raffia, shells, horns, nails, mirrors, twine, cloth or herbs.

The Chechewa or Chewa are a Bantu-speaking tribe that has existed since the first millennium.

They first had contact with the Portuguese in the 17th century.

Most of their population is in Malawi, but they also live in northern Zambia and Zimbabwe.

They mostly produce corn and sorghum from slash-and-burn agriculture.

The Spirits and the Living

It is said that all living things were made by God during a thunderstorm on a mountain (Kapirintiwa) which now sits on the border of Mozambique and Malawi.

The Chechewa believe that all spirits of men and animals keep in constant contact with the living through dance. 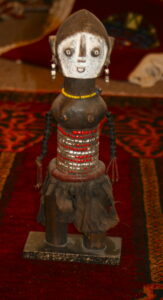 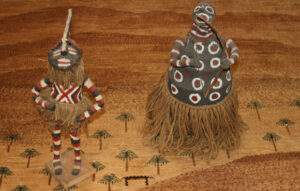 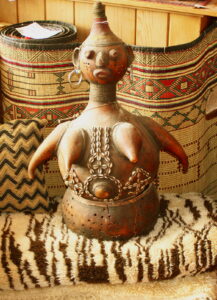