We have a number of antique Russian Icons in our store and home.

The artistic originality of icon artists–starting with the Old Russia of the 13th through 15th centuries, and as late as the 19th century–added to the cultural life of every Russian.  When we traveled through Russia a few years ago, we were amazed to see the range of icons in every church, museum, and even small town.   Each region and each local “school” (or “style”) showed its own type of icon.

In spite of these divisions of types, all the icons showed striking originality.  In addition, they clearly distinguished themselves from icons in other parts of the world.

According to the classical Orthodox religion, an icon is said to be a special gate between a person’s religious beliefs and God.   Each of the signs and tones of color on an icon represents a religious feeling or belief of the time. 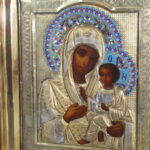 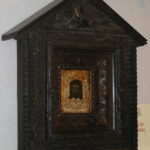