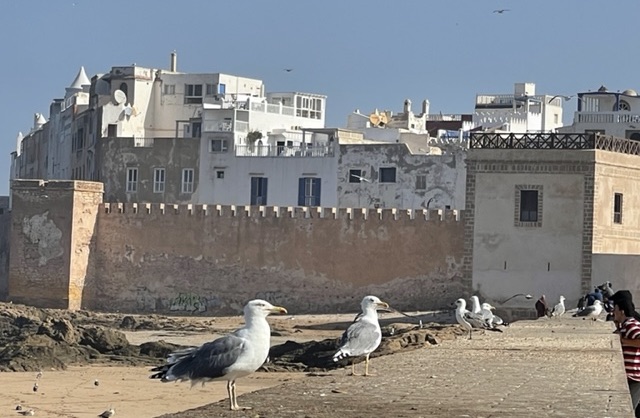 Essaouira, shown in “Game of Thrones”

“Game of Thrones” viewers will know Essaouira better as Astapor, which is the most southern of the three city-states of Slaver’s Bay.   You can remember it as where Daenerys Targaryen bought an army of 8,000 soldiers. 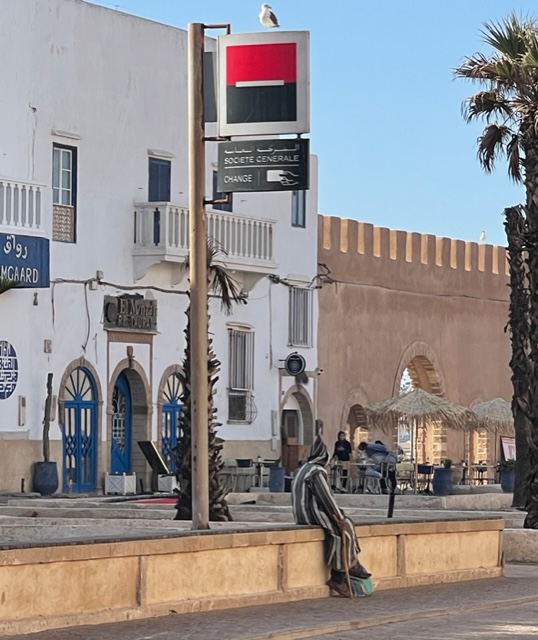 The ramparts near Essaouira’s Harbor

Essaouira is a seriously old city.  People have been living there for thousands of years. 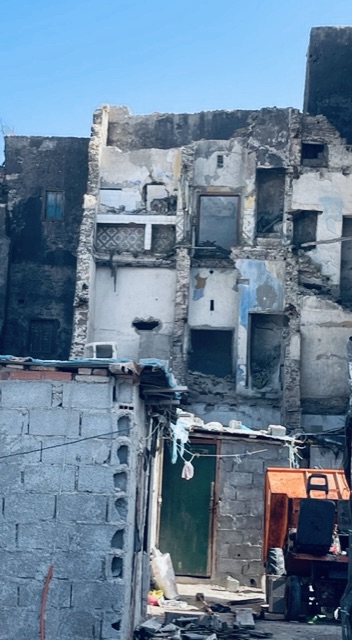 An old section of the ramparts of the Medina.

It was called Arambys under the Carthaginians in the 5th century BC. 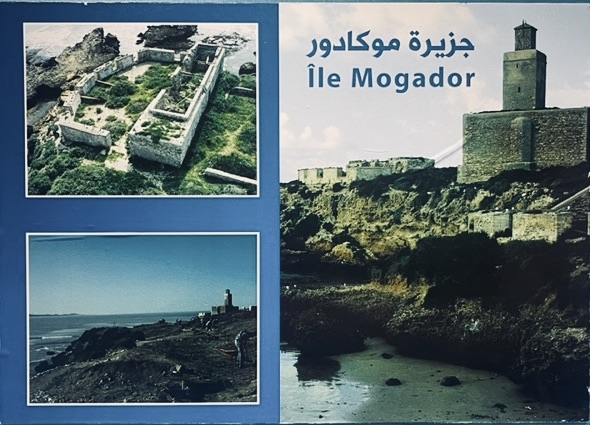 Mogador Island off the coast.

Later, in the 3rd century AD, a Roman villa was built on Mogador Island off the coast 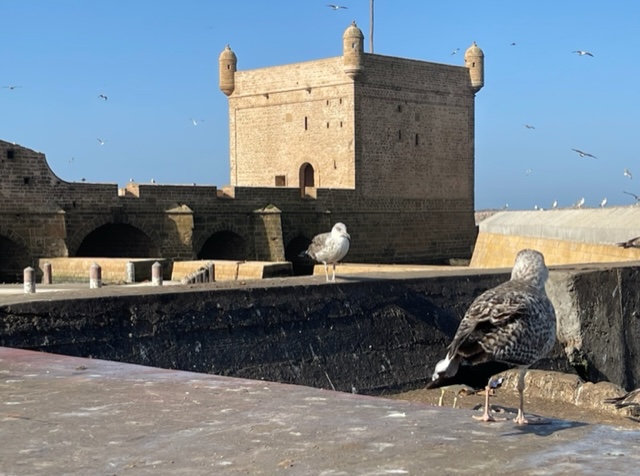 Borj el Barmil, where boats come in and sell fish.

We drove three hours west from Marrakesh to visit Essaouira, our favorite Moroccan City on the Atlantic Coast.  The whole Medina (walled city) is a UNESCO World Heritage Site.  We love the blue and white houses gathered up by the walls of the Medina.  Its walking streets are full of small shops, running children, artists, and tourists from around the world.  The weather is cooler than the rest of Morocco, and there always seems to be a cold wind from the sea. 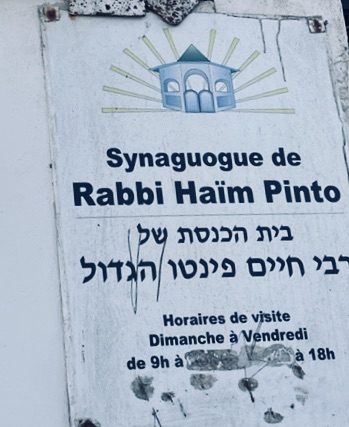 A synagogue in the Medina.

One of the largest populations of Jews in North Africa used to live in Essaouira.  The city was once 40 percent Jewish.  You can still find old synagogues in the Mellah, and a large Jewish cemetery.  Even though most of the Jews left in 1948 when Israel was created, the number of Israeli tourists has greatly increased with the recent strengthening of political ties between Morocco and Israel.  We actually saw more Jewish tourists in Essaouira than Americans. 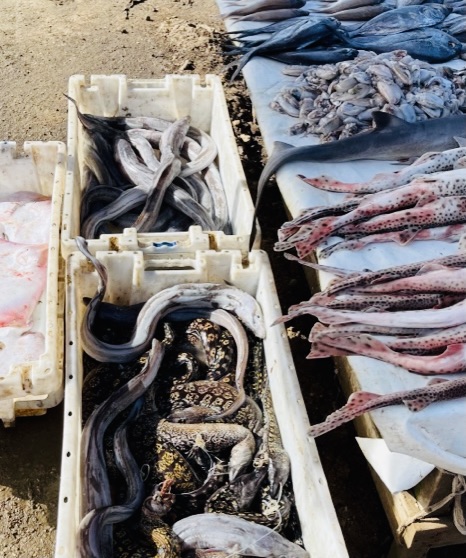 We loved the fish market.  In the evening you can eat freshly cooked seafood from small restaurant kiosks. 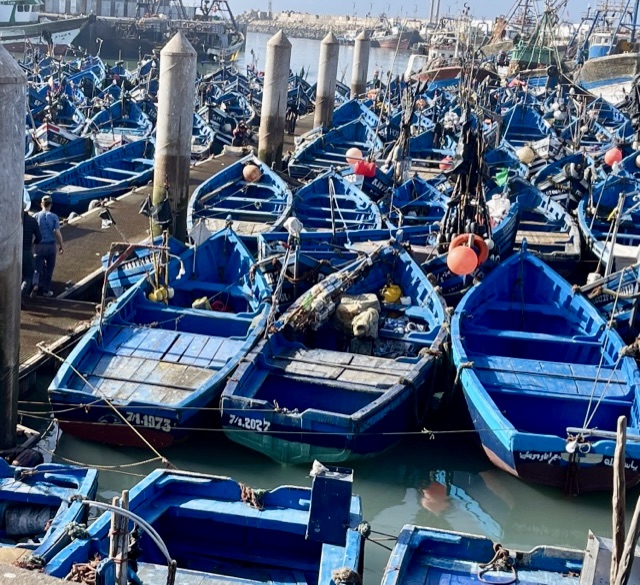 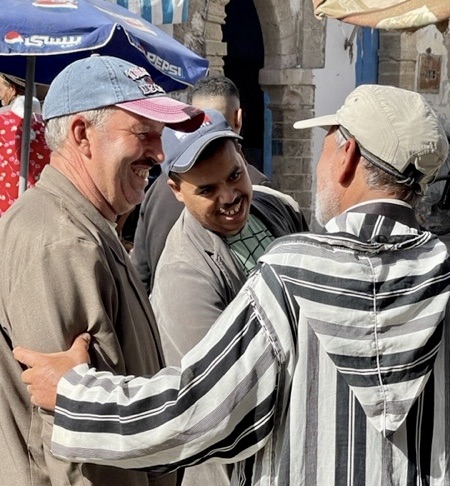 Love all your pictures of Morocco
7 spent time in Marrakech at a cooking school
Have many treasures from your store in Langley. Will visit you soon

Love seeing your travels! I’m so happy you two are living here in the PNW.
I come from an older area of the US, and value antiquity and enjoy your offerings.

Just a note. We got the same story at the Jewish cemetery in Marakesh. The Jews did not leave willingly when the state of Israel was created. They were forced out. “Moroccan Jewish communities, constituting the largest of the Jewish communities in North Africa at the time. Pogroms in Oujda and Jerada and fear that Morocco’s eventual independence from France would lead to the persecution of the country’s Jews, led to a large-scale emigration.”

Essaouira is beautiful and so well worth a visit.