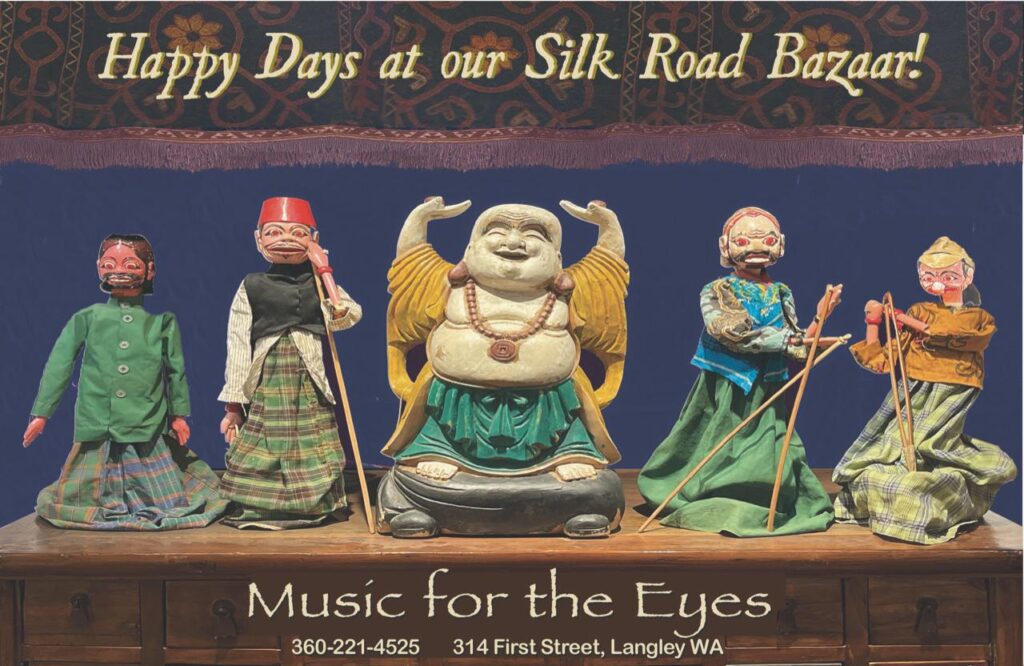 A New Project Celebrating Whales at Music for the Eyes!    (photo by Marsha Moore)

When Roderick McLeod and his family moved to Langley around 1900, they built a house on First Street and planted a seedling of a white pine to remind them of their previous home in Nebraska.  The tree took root and grew, just as did the McLeod family.  One daughter, Margaret McLeod, grew up to become the first female mayor of Langley in 1922. 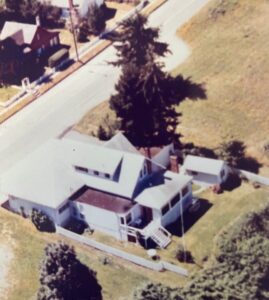 1956 Aerial Photo of Tree beside the Building.

Over the ensuing years, the tree continued to grow beside the McLeod homestead.  The house passed into other hands.  With additions added and added again, the house became first Duncan’s Dry Goods Store and then Price’s Department Store.  (This was run by the family of our wonderful local public servant and politician, Helen Price Johnson.) 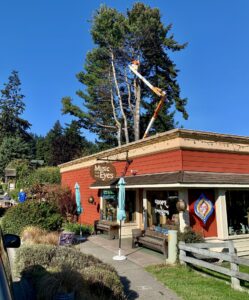 All this time, the McLeod’s white pine continued to grow and grow until it dwarfed a tall northwest native Douglas fir adjacent.  Then, sadly, disease struck.  The “White Pine Blister Rust” attacked the historic McLeod white pine and slowly began to kill it.

As the sick tree began to threaten to drop huge branches onto parked cars below, efforts were made to save it, but to no avail.  The city approved removing the diseased tree, and it was cut down in 2020.

Saddened by the need to remove the tree, the owners of the building thought about what they could do to honor both the pioneer family who planted the tree…as well as the tree itself and the nature surrounding the city of Langley.

They decided to ask the arborist removing the tree to leave intact the final 12 feet of the huge pine tree’s stump so that it could be carved into a fitting memorial. 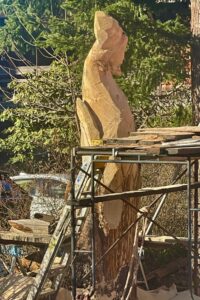 As the tree was removed during the annual gray whale season that brings a dozen or more gray whales to feed on the mudflats near Langley, it was decided that the memorial should be a feeding gray whale carved out of the huge stump.

The natural choice for an artist to carve this whale would be the noted local woodcarver  Pat McVay.  Pat had already contributed other statues, benches and wood projects for our shop over the past two decades. 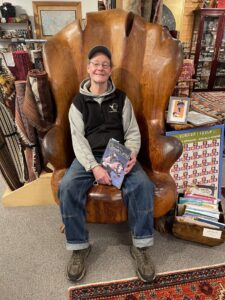 Pat, Whidbey’s most prolific chainsaw artist, started working in wood in Paris, France, 40 years ago.  Later,  he moved to the Olympic Peninsula and was taken by the natural forms he saw in the forests.  He began wood carving in the genre called “chainsaw art”, which is much more than just wielding a chainsaw. He was encouraged along the way by his older brother, Mike, also a chainsaw artist.

Nowadays Pat’s work is celebrated in many public and private collections throughout the U.S. and Canada. 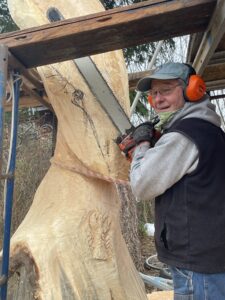 In short order, McVay carved the whale and even added several “ghost shrimp”, the local gray whale’s favorite food, for good measure around the stump.

The final step in the memorial was to find a name for our new whale.    We decided to call the whale “Civility”, as a symbol of a value we should strive for in these complicated times.

Please come by Music for the Eyes to visit this wonderful sculpture and memorial to the pioneers who first settled Langley…as well as the gray whales who visit every year. 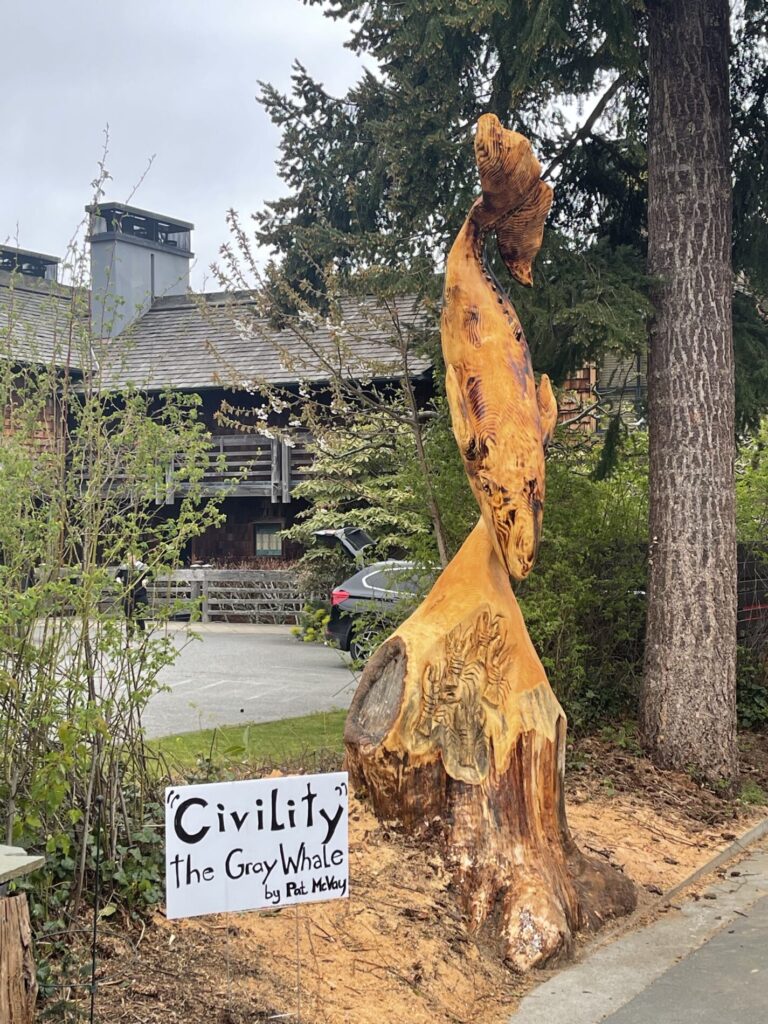 Civility, our New Whale at Music for the Eyes.

Loved reading about THE tree and how Artist Pat McVay transformed its remains to celebrate the whale. Commendations to all involved, especially to Fred & Sharon Lundahl and Pat McVay!

What a great memorial to an old tree. May it weather grey, blending with the lovely building behind.

I second the previous comment. Fred and Sharon do so much to honor our community and its history and make our town so special. As does Pat McVay with his inimitable wood carvings. This is a wonderful story and a spectacular sculpture. Thanks so much.

No Way!!!!
There is something romantically beautiful about The Tree and The Whale. After reading this story and seeing the art, artist, and commitment by Music For The Eyes, it’s a humble reminder how important of how valuable history is when honored through the Civility of our daily decisions. THANK YOU FRED & SHARON! We LOVE You!!!

Congratulations Pat for creating a beautiful tribute to this tree! And to the local whales!

What a beautiful tribute to the Whale, Tree, artist Pat McVay and the Lundahls’ who continue to create magic in Langley. Reading this is a gift in itself. Thank you for your awareness, generosity and inspiration- this makes my day!

Beautiful sculpture. I love that the whale is diving. The sculptor captured the power of the fluke and smooth movement through the ocean. Wonderful, Pat.
Thank you Fred and Sharon.

Wow! What a wonderful tribute. This is the part of Whidbey Island I miss th most. Blessings

The carving sounds wonderful; the name not so much Not that I’m against civility per se

Fantastic creation, Pat! Thanks for making it happen, Fred and Sharon.

Beautiful creativity, so appropriate to the site. Thanks to Pat, Fred, and Sharon!

« New Stuff at Music for the Eyes
Shopping in Marrakesh »