Boats on the Sand near Nukus–Aral Sea Disaster

Sharon and I used to visit Nukus– the capital of the autonomous republic of Karakalpakstan within Uzbekistan–in the 1990’s for three reasons. 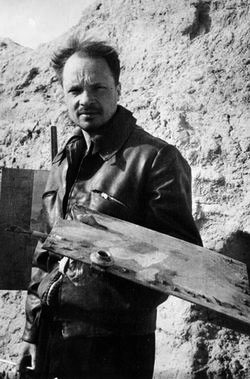 First, it was the jumping-off place to visit the ever-shrinking Aral Sea and ships beached miles from the shoreline.  Second, it was a major center for Soviet biological and chemical warfare research sites, which the U.S. government was helping to clean up.  Third, the town was the home of one of the largest collection of Soviet-era “avant garde” art in the world.

This stunning collection was gathered by the Soviet archeologist Igor Savitsky and housed alongside the Karakalpakstan ethnographic collection in an old museum building.

It was this third reason–the Savitsky collection–that brought me back to Nukus on this latest Central Asian trip.  Karakalpakstan (or Qaraqalpakstan if you prefer) has always been a rather neglected region.  The fact that Savitsky, a Russian, amassed a huge collection of banned art away from the prying eyes of the KGB was something of little interest to the current inhabitants of the area.

Back in the 1990’s amazed foreign diplomats like us trekked to see this incredible collection and help out as we could.  Back then, the U.S. government provided air conditioners to help keep the separate storage warehouse somewhat temperature controlled.

A few years after we departed, the local government showed their utter disregard for this gem in their midst by razing the museum building to the ground and giving the museum staff just two weeks to remove everything for storage.

This might have been the end of the art, except that news of the collection and already spread; the outside world reacted in horror to the government’s decision to demolish the museum to build a bank.  The outcry so shook up the government that plans were immediately announced to build a new museum building “better than before…”

An award-winning documentary, “The Desert of Forbidden Art”, which told the story of Savitsky and how he amassed his amazing collection, brought

world-wide fame to the museum.  With groups of foreigners trooping out to remote Nukus to see the art in its new building, the local government began to see that tourism might be an economic boon to the region.

By the time of my 2013 visit, the museum’s director–who had seen her first building demolished without a second thought–was watching the fruits of the international campaign to preserve the collection.  Shaking her head in amazement as we watched excavators digging a

deep foundation for a modern storage warehouse, she joked that she first thought “they were digging my grave.”

Now the museum has a robust worldwide web presence.  Thousands of “Friends of the Savitsky Museum” are interested in helping to preserve the collection, proof that the instant connectedness of the modern

world can affect the survival of unique art in a distant and remote part of the world.

The museum director proudly showed us the old U.S. Embassy-provided air conditioners and said that we had a part in the beginning efforts to give the collection the attention it deserves.

NOTE:  Sharon picked out her favorites of Savitsky art shown in this article.  If you want to see others, go to their website at http://www.savitskycollection.org.

Beautiful artwork. Thanks for sharing.

Dear Sharoon and Fred,
This is really a new world of art for me. Appreciate ur new discovery for me.
The respect for art is need of the time.
I am lucky that i am in ur mailing list.

Love reading about your travels. We’ll be in Langley in two weeks. Hope you’re there. Steven and Barbara Raichlen (Planet Barbecue)

Enjoyed my history lesson. Does this museum ever loan some the exhibits to other museums? Nukus is probably not on most tourists list of places to go.

« Tajikistan–Better than Before!
The Golden Road to Samarkand »