Fred loves Baku.  He loves its history, its people, its arts, and especially its textiles.  During our week in Baku before we joined the tour group, we stayed in the Sultan Inn, a small boutique hotel in an old mansion inside the walls of the old medieval city of Baku. 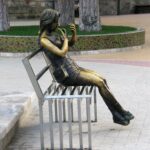 We found all of the carpet dealers he had known before were still in business, and we spent hours drinking tea and reminiscing. 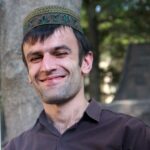 Baku is filled with extraordinarily beautiful 1900-era baroque buildings built during the city’s first oil boom.  In 1900 with the Rockefellers, Rothschilds, Alfred Nobel and other western millionaires flocking to the city, Baku was the number one exporter of oil in the world.

A little more than 100 years later, Baku has once again become an important oil exporting power, and huge wealth is flowing into the country.  Not all the money is  going into luxury cars and shopping malls filled with Benneton and the Gap stores.  Some is being used to erect new buildings, many in the style of the older baroque masterpieces.

We found amazing modern buildings like the new carpet museum being constructed to look like a rolled carpet, other gala event centers such as the 2012 Eurovision Song Contest’s concert hall, and the world’s tallest flag pole–along the city’s seawall park on the Caspian Sea.

The city’s skyline inland from the Caspian Sea had changed incredibly too, with the construction of three  huge over-the-top skyscrapers shaped like flames whose reflective glass skins exhibited gigantic light shows all night.  The whole town seems to be continually in party mode.

The carpet business in Azerbaijan, however, is not doing great.  Even though their carpets are of legendary beauty, they are now too expensive for the American market.  Even the Baku rug stores are selling the cheaper Afghan and Pakistani carpets.  Stunning old rugs are still to be seen, but government rules forbid their export.

Looks like Georgia Gerber has been in busy in Baku —or could be…funny.
All is well up north here. No frost yet – Very unusual, but almost No Eagles -VERY VERY UNUSUAL…hmmmm…=a portent…?
Enjoy. Off to Bahahaha next month..

Hello,
I am not very familiar with these countries and without you conveying information to pique my interest would be missing so much. Thank you.

as always very informative and well worded. i am thinking to suggested to compile in the form of book to be published for art lovers.
wish u to continue plz

This was a great write and I’m looking forward to visiting Baku. I wanted to ask you whether there were cycles available in Baku city for cycling around; like it is in most European countries.