Georgia has always been one of our favorite countries.  This little country with a strange alphabet has witnessed some momentous events…both happy and sad. 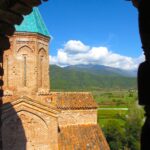 On the happy side, democracy is thriving.  The government is generally considered to be doing a good job for the people.

After a U.S.-educated president was elected, he swiftly moved to get rid of corrupt cops in a campaign that saw Georgia rise from a high corruption index, still shared by other former Soviet states, up to a low corruption index level of countries such as Belgium.

The Georgian government started constructing modernistic new municipal buildings around the country which are largely made of glass symbolizing transparency in government.

Georgia held a presidential election right before our visit, choosing a rich pro-Russian businessman.  To the surprise of many observers, the loser didn’t do the third-world trick of annulling the elections, but instead admitted defeat and gave up power for a peaceful transition.

Also on the happy side, the economy is doing well, despite a paucity of natural resources.  Hosting oil and gas pipelines connecting the Caspian Sea oil to western markets brings in considerable cash to the economy.

Tourism is booming.  During Soviet days, a resort stay on the Black Sea coast was a coveted reward to many a factory worker.  Now, Georgia is a destination for wine tourism.  The country has produced fine wines for centuries, but after mentoring by American wine tourism specialists, they now have the B & B’s, signage and tasting rooms to go with it.

An amazing development in this part of the world is the fact that Americans don’t need visas to visit.

Who is This?. © Fred Lundahl

On the sad side is the lack of Russian visitors and tourists.  Diplomatic relations are suspended because of the Russian invasion of Georgia in 2008.  That nasty military action, which almost cut Georgia in two in a short week-long war, resulted from a grave miscalculation by the Georgian president who thought he had America’s tacit support to try to regain control of South Ossetia.

Russian President Putin, who made no secret of his contempt for his Georgian counterpart, was quick to send a massive Russian invasion force into Georgia that only stopped (almost within sight of Tbilisi) because of western pressure not to damage the crucial oil pipelines running across the country.

Getting the Last Bale of Hay. © Fred Lundahl

The Russians withdrew, but the situation is frozen.  Maybe the new pro-Russian president can help reboot relations.

This won’t, however, help the thousands of internally displaced persons (IDP’s) who lost their homes in the three little Georgian internal wars of the 1990’s and have virtually no chance of ever returning to their homes in Russian-supported semi-independent enclaves on Georgia’s environs.

Still, the IDP’s are better off than similar IDP’s in Azerbaijan who live in old Soviet decaying apartment blocks.  Georgia has built neat and clean IDP camps filled with rows of identical small single-family houses.  Our guide sadly pointed out that the recent decisions by many inhabitants to begin building additions and extra rooms reflects their conclusion that they will never have a chance to return to their former homes.

Very interesting article. I would love to travel to Georgia some day. Cheers.

I learn so much from you two! Bob was just talking to a patient of his this week who is being posted as a Peace Corps volunteer in Georgia. Please keep writing and I’ll keep reading!

Very informative as always. The optimistic spirt of the Georgian is much appreciated.

Succinct and upbeat, yet very informative. Thank you for sharing your insights with us, about this brave and beautiful country.

« Armenia
Music for the Eyes and Ears in Phoenix »