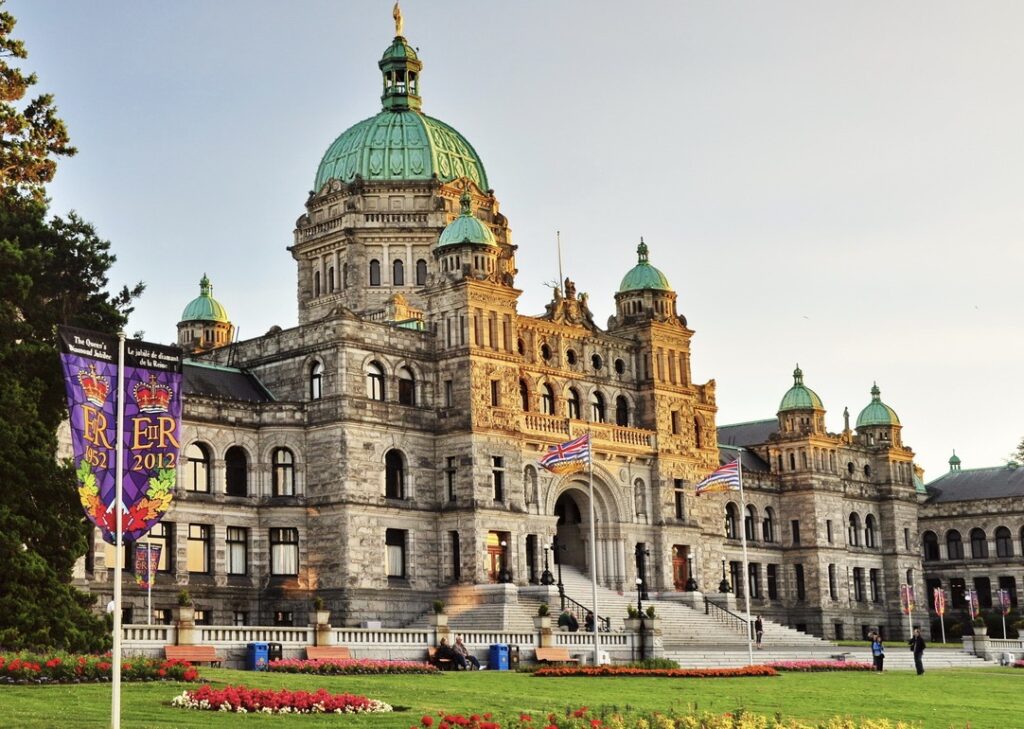 Parliament Building in Victoria BC

When you last read a travel blog on this website in March 2020, your intrepid travelers Sharon and Fred had barely escaped being locked down in Chile.  We had been refused travel through Canada, and left our Prius stranded in BC.  We managed to rescue the Prius in late 2020–with the help of some brave friends–only to have the car totaled a week later, a story worthy of a separate blog. 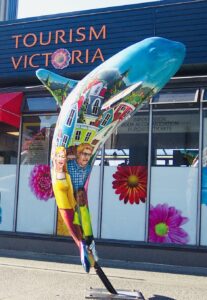 Painted by our artist friends in downtown Victoria

Since our return from Chile, we patiently waited for declining COVID rates to again allow travel.  We thought Canada would quickly come to its senses and allow us back to our favorite nearby international destination–Victoria BC.  Every 21st of every month the decision to open the Canadian border was reviewed by the government…and put off another month.

That is until this August, when the Canadians proudly announced that they would allow in fully-vaccinated Americans who could submit a negative acceptable molecular test, such as COVID-19 PCR,  taken in the 72 hours before arrival in Canada.  We were overjoyed and began to plan our first trip to Victoria in almost two years.  (We won’t comment on the fact that our own government did not reciprocate and still does not allow Canadians into the US.)

We planned to fly our Cessna airplane up to Victoria, as we have done dozens of times over the years.  The process is a bureaucratic headache, but one we had become accustomed to navigating.  We intended to meet up with old friends who were driving up from Seattle.

The additional bureaucratic hoop we had to jump through this time was a complex and long online application to enter Canada on the ArriveCanada website (and phone app).  In addition to all the expected info required, we had to download our vaccination cards.  Then we had to fill out a long and convoluted quarantine plan in case we got sick in Canada.  Ominously, we were told we might be selected for a random COVID test on crossing the border, even though we would have in hand the required negative test taken within 72 hours. 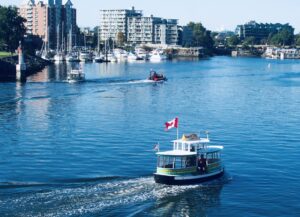 We persevered and submitted our application, receiving approval to cross the border with passport, vaccine card, and proof of negative test.  The next step was to find and take the particular PCR COVID test, which required 24 to 48 hours to learn results.  Scheduling the test and taking it at the Everett Clinic went smoothly, but receiving the results was fraught with stress.  Fred received his negative results about 12 hours before Sharon, even though they were taken at the same time.  Other friends found their wait of 24-48 hours extended until the next day, making receipt of the test result perilously close to the 72-hour deadline.  They waited in Blaine, and got the wife’s negative result at almost the last hour.

Another friend was selected for random testing, and was not able to find a site in Canada to turn in her papers, relying on her son there to do so.  She hopes she will not be on a “No-Entry” list next times she travels to Canada. 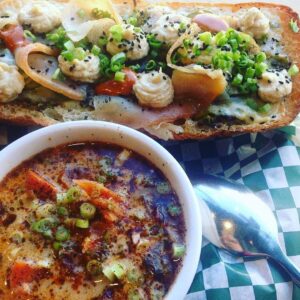 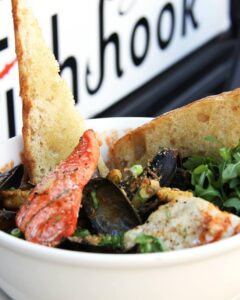 After we managed all the bureaucratic hurdles, we found our lovely B&B managed by an old friend in Victoria.  It turned out that the most difficult part of the trip was finding a rental car.  Our old reliable rental car provider — Budget — had no cars available for any date and did not answer their phone.  Our perusal of Expedia, Kayak and all the travel sites revealed only a single car for rent in the entire Victoria area — a Toyota for $ 189.00 (Canadian) per day.  Whew!  We knew that rental cars costs had gone sky high and were tough to come by.  Our friends driving up had rented a Toyota at SEATAC for $100.00 a day. 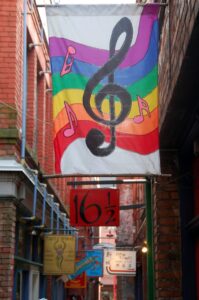 Upon arrival in Victoria, it seemed we were one of the first private aircraft to take advantage of the newly opened border.  Our processing went remarkably smoothly and remarkably like the pre-COVID times.  We picked up our rental car and drove into Victoria on familiar streets little changed in the many months since we had visited.  We could see America–the Olympic Peninsula –staring at us from across the Straits of Juan de Fuca.

Of course, we could see changes, as Canada had wrestled with COVID just as we had.  Some familiar restaurants and shops had gone out of business.  Masking was optional, and the population seemed at ease with that.  We wore masks indoors, as did most of the Canadians.

Canada is dealing with its own devils this summer.  The discovery of hundreds of unmarked graves of children around the premises of the country’s infamous indigenous “Residential Schools” was a shock affecting the entire country.  Adding to that was the reckoning that had been going on in recent years over the mistreatment and “cultural genocide” inflicted on its indigenous population.  There was a moving memorial to those “lost children” on the steps of the Parliament Building.

Otherwise, Victoria didn’t seem to be missing its visitors from the U.S.  The streets, filled with Canadian summer tourists, were bustling and cheerful. The flower baskets were blooming.  We were happy to be there…again…finally. 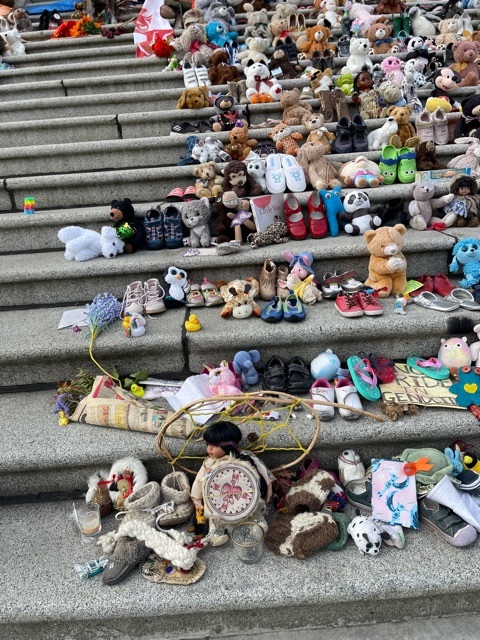 Memorial on Parliament Steps to the “Lost Children”

very nice to read of your travels again! melanie

Thank you for this blog, and so glad you two were finally able to travel somewhere!
Carolyn Tamler

So refreshing! Thank you, especially for including the photograph of the memorial dedicated to all the indigenous children torn from their families and native culture, whose graves were found. It is so good to know that our Canadian neighbors have a national conscience.
(Do we? We had those schools too.)
We’re looking forward to returning to your beautiful shop someday soon.

sounds like a wonderful if somewhat stressful trip. Glad you are back in the travel biz. Hav eyou heard form our friends in Uzbek land re covid and how they are doing?

What a wonderful resource you are! Thank you for the detailed account,

Love your spirit
and the Music for the Eyes shop.

What intrepid travelers! Glad to see you are helping trans-border relations :-).

Have a Molson for me.

Congratulation to both of u to make this trip. I was missing the blog since a long so regained. It is very informative.
Wish would be continued.

1. Wow! Just getting into Canada seemed to be (mentally) nothing less than training to climb Mt. Everest…only a seasoned climber would have attempted such a feat. Thanks Sharon and Fred for being the cliff-hanging climbers we have all come to envy.
2. The “waiting” game…..I’ve never had to wait 72 hours to get a Covid test result…all the while praying for it to be negative…but, I’ve surely peed on a lot of pregnancy sticks…and those 3 minutes definitely “felt” like 72 hours…(”come on…show me another negative”!) I feel their pain!
Thank you both for lovingly and mindfully sharing the good and the bad of “The Lundahl’s Journeys”. It allows us all to enjoy your adventures and pray for those in other countries who really need hugged. Love you both! Ozzy

As the “old friends” who met up with Fred and Sharon in Victoria, we second all of the remarks about the trip. How civilized is Canada and how “civil” is the very diverse population! A real breath of fresh air. We are grateful that Canada has once again opened its borders to visitors.