The Oldest Carpet Known to Man

A replica of the oldest rug in the world–the famous Pazyryk carpet–is now on display at “Music for the Eyes” on Whidbey Island in Langley, Washington.  The rug was commissioned from “Magic Knots” of Baku, Azerbaijan by the owners of the Whidbey Island shop.  The replica took three weavers four months to complete.

Until 1949, the oldest known pile carpet was an exquisite Persian court carpet from the 1400’s.  Scholars assumed that the art of complicated pile carpets had developed earlier but, given the perishable nature of items made of wool, no earlier examples had been found.

That year, A Russian archeologist excavating the frozen grave of an ancient Scythian chief in Pazyryk, Siberia, discovered among a rich trove of burial goods an astonishingly detailed, virtually complete carpet frozen in a ball of ice.  The carpet was carbon-dated to the 4th century BC and, instantly, the origins of pile carpet weaving were moved back two thousand years.

Since its discovery, the Pazyryk carpet has been on display behind thick glass in a refrigerated case at the Hermitage Museum in Saint Petersburg, Russia.  The carpet features in virtually every book on woven textiles and carpets, but, despite decades of scholarly research, its origins remain a mystery.  Who made this carpet?  Where was it made?  How did it end up in a grave in Siberia?

It has always been assumed that such an advanced example of the weaver’s art  had to have been produced in a workshop in one of the ancient world’s urban centers.

Few scholars believed that it could have been woven by the Central Asian nomads in one of whose graves the rug was discovered. 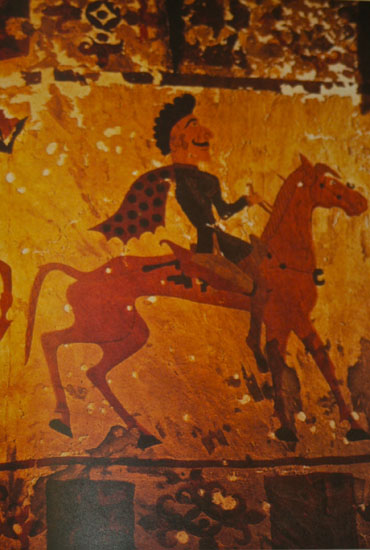 A Scythian felt preserved in a frozen tomb in Siberia for 2,000 years

The carpet itself is a finely woven, short piled work made of what are now called “Turkish” knots in an amazing density of 250 knots per square inch.   The usual textiles and wall coverings found in nomad graves, including those at Pazyryk, were made of felt and leather

The carpet’s design elements consist of an outer border of horsemen and grooms leading decorated horses very similar to figures that can be seen in  carvings made  at  Persepolis in Persia around the time the carpet was woven.

The center field is made up of a series of double cross designs similar to a stone floor found in an 8th century BC palace in Nineveh Mesopotamia.    There are also woven bands of griffins in the carpet very similar to carvings of griffins found in many ancient middle eastern urban sites.  These are all signs pointing to an urban, Middle Eastern origin for the carpet.   However, there is also a band of graceful elk woven into the carpet.  Elk live in Siberia, not the Middle East.

Further complicating the question of the origin of the famous carpet is the question of the wool fibers and the vegetable dyes used in the work.  Advances in research tools in the 1980’s and 1990’s has enabled scholars to do detailed chemical and structural analysis of materials in the carpet.   One scientist reported that the structure of the wool fibers in the carpet are identical to wool fibers in sheepskin fleece found in the same grave.  Another researcher reported that chemical analysis revealed that the red dye in the carpet was identical to the red dye found in some more primitive felt textiles found in the same grave.    Both these recent discoveries would suggest that the carpet could have been made by the nomads themselves, rather than in an urban center as was first thought.

The very existence of this ancient carpet,  whose next oldest relative was made 2000 years later, along with the still-unsolved mysteries of its origins, has  wrapped the famous textile in an aura of mystery.

At least one novel was been written about the   origins of the carpet, postulating that weaver might have been working in a carpet workshop  in a Persian city in Turkey. 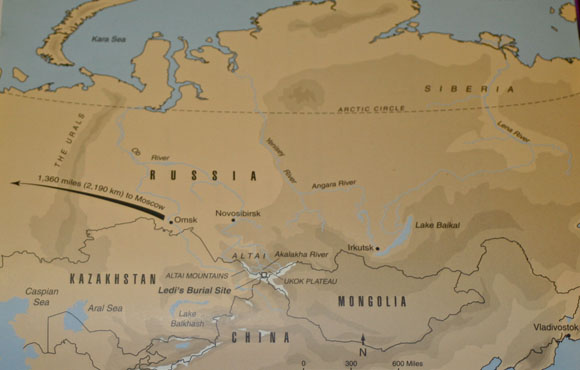 In that story, the young woman marries a visiting Scythian chieftain with whom she returned to the Central Asian steppes where she continued her weaving, producing wonderful carpets.   Given that the two bodies in whose grave the carpet was found were a man of Indo-European stock such as the Scythians, and a woman of Caucasian stock, such as the Turks,  this romanticized version of the carpet’s origins is easy to accept when viewing the wonderful replica of this famous carpet in the “Music for the Eyes” shop in Langley.

dear Fred! I remember this carpet..

I read every word and enjoyed it so much. It is a lovely site and a wonderful story. Cynthia

Hi Fred .. nice to c u here. i c u are doing something that keeps ur interest, and is useful in helping others understand other cultures, and crafts. nice fit for a foreign service hand! congratulations on ur marriage!

I had always loved that rug, the story makes it even better (if possible!!!) Hope this finds all going well with you both. New Mexico is interesting – a third world country within the US! The weather is wonderful.

Fascinating story. I am looking forward to reading Jon Thompson’s book – just a beginning for me.