SKYPE SHOPPING:   As most of you know, our shop is filled with the detritus of shopping from our trips.  This April’s trip to the ‘Stans in which Fred traveled by himself without the shopping maestro Sharon presented a challenge…but not an insurmountable one.

With Skype and Tango apps on our iPhones, Fred was able to allow Sharon to actually do the shopping in Central Asia from the comforts of Whidbey Island (at least when in a WiFi environment)

Although Fred was on his own at country markets in the back of beyond where there was no WiFi, he could invite old contacts from the early times to bring their wares to hotels and B&B’s with WiFi where he would lay them out and phone up Sharon.  With Fred pointing out the  wealth of 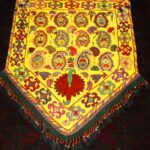 goods arrayed before the iPhone camera, she could ask the price of items she liked and negotiate purchases from the other side of the globe.  It might not have been as fun as actually being there, but the process worked well…travel without traveler’s tummy troubles.

URGUT MARKET:   During our years living in Tashkent, the Sunday market at the little town of Urgut near the border with Tajikistan and only an hour from Samarkand was the best place 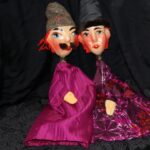 to find unique handicrafts and old textiles.  We visited this wonderful, crowded and colorful market many many times for almost four years with dozens of our friends and visitors.. and bought lots of our old rugs and textiles there.

Sharon became so well known in Urgut that shoppers for years after we had returned home to the U.S. could still ask a seller to give a “Sharon discount.”  Fred

Fred and Friends in Urgut Market.

visited the market on three different occasions in later years by himself and, although the merchants were happy enough to see him, they all asked, “Where is Sharon?”

Advising other friends visiting the area to “not miss” this market experience, we have sent numerous shoppers to the small town over the years.  The last few visitors did not seem as happy as we had been with the shopping at Urgut.   Puzzled, Fred trekked out to the market’s new location in April and was dismayed. 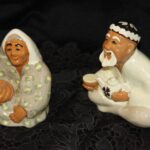 The local authorities had built a gargantuan new covered market of many acres in the middle of Urgut’s cotton fields.  The place was packed with cheap Chinese goods.  Fred finally located his old textile merchant friends in a muddy field on the back side of the covered market.  Their dozen or so stalls were a shadow of their former hundreds.  The old friends could not afford the new rents.

Naturally, there was no WiFi in the mud so Fred was on his own purchasing wonderful old textiles.  As he drove away, several of the merchants said, “Tell Sharon we are hurting.”

Fred and Friend at Urgut Market.

IRANIAN VS. TURKISH CONSUMER GOODS:   Ever since the USSR broke apart in 1992, the struggle for the hearts and minds (and pocketbooks) of the Central Asians has not been between Russia and the U.S….but between Iran and Turkey (and more recently China)  Both those countries produce a full range of consumer goods for their own people and for export markets as well.

Almost 25 years after the struggle began, Turkey seems to be the clear winner, with a variety of Turkish products available.  There still are some Iranian goods to be had in the markets, and one example might suffice to show the trouble Iran might have making inroads into any English-speaking market.

Just as the U.S. has its line of “Ivory Snow” products, Iran has a line of toiletries, including soaps, detergents, toothpastes, and mouthwashes marketed under the brand name of “Snow” to reflect their purity.  Unfortunately, when you write the Farsi word for “snow” in English letters for the export market, the resulting word might lead you to choose another brand of toothpaste.  (See photo.)

Loved this post, Fred! That’s probably as close as we’ll ever get to the Stans….. Brings them alive!

I love it. Especially the “Sharon Discount”. Sad news about the new Chinese market though.

I wish you had Shirin jan too in that trip , but you guys know beter then me, hope you both are happy an save. All the Best Najib

« The Golden Road to Samarkand
Is Tashkent the New Silk Road? »