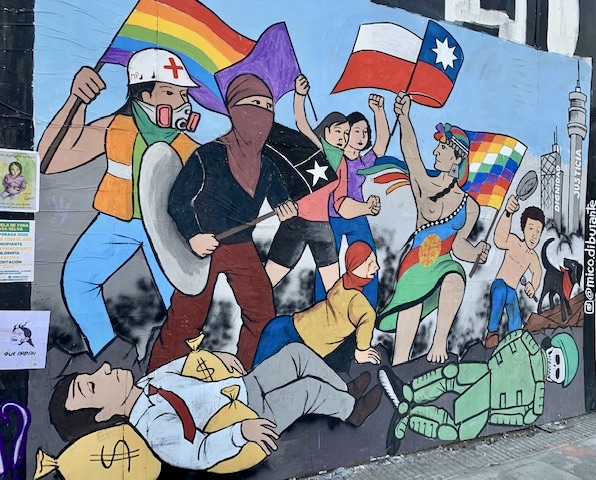 Mural of Chile in Revolution

We usually try to keep away from politics in our blogs and focus on the people we meet and the sights we see.  In Chile this time, however, politics are so intertwined with the people and the sights, we cannot avoid commenting on what we saw. 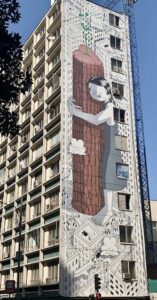 On our first trip in 2015, we saw a country recovering from its horrible dictatorship era.  They had not forgotten what they suffered (a big topic in their cinema and literature), and the country seemed to be moving forward to the brightest economic future in Latin America.  In certain neighborhoods, stunning murals –a uniquely Chilean art form–were being painted on virtually any bare surface, from a simple fence to the sides of tall buildings. 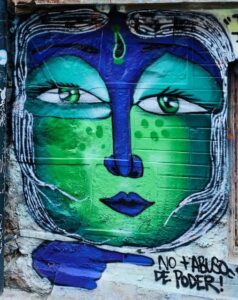 On our next trip in 2018, things had begun to change.  That time we witnessed popular demonstrations in downtown Santiago.  We watched crowds of demonstrators gather at a downtown Santiago university with the intention of blocking the main thoroughfare.  The police allowed the crowd to march, but they had to stick to the sidewalk and not block traffic.  We watched the results as protesters moved in an orderly fashion down the sidewalk, waving their banners. 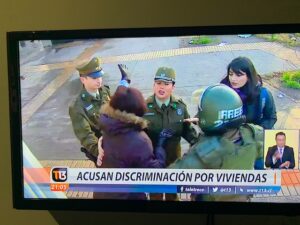 Television image of confrontations with Police.

On this trip, however, we were stunned at the escalation in the protests.  We knew the reasons for the increased protests, as Chile has one of the highest income inequality rates on the planet and pensions so low that the elderly cannot afford to live. 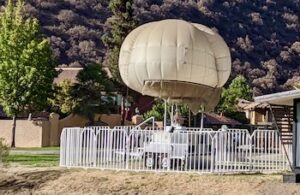 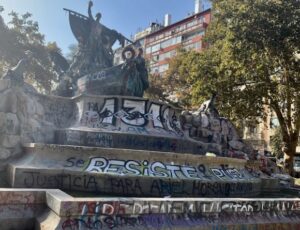 One day we watched middle school students waiting to start their “students’ protest” in the main square.  Later that night, we watched the live video feed (from cameras high in surrounding buildings) on the official protest website.  Police moved in to break up the protest, and it turned violent. 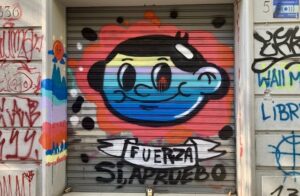 The bloody eye and the recently added “Yes Approve” (constitution)

Police often reacted by firing tear gas and plastic bullets into crowds, causing injuries and deaths. So many protestors lost eyes, that the eye became a protest symbol on graffiti  and murals.  Even the government’s own Ministry of Culture building has large eyeball posters in all its windows. 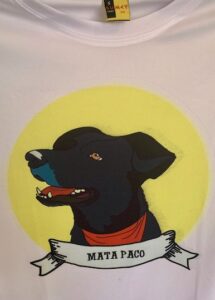 “Kill all police” slogans are spray-painted on walls.  A black dog that bit a policeman has become a national hero nicknamed “mata paco”(cop killer). The face of the dog is painted on murals and T-shirts everywhere.

With the police occupied downtown, often exhausted by working too many shifts, criminals increased opportunistic crime in local neighborhoods.  There now is an overwhelming negative attitude towards the police, while firefighters are still considered popular heroes for fighting the blazes caused by rioters. 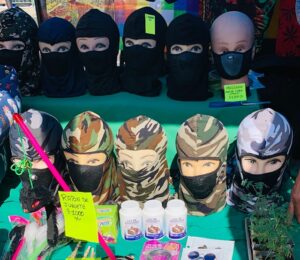 Street Market Selling Masks to Use in Protests

One of our friends we intended to visit in Santiago is married to a police officer.  As it turned out, we could not see the family and left a package for them at our hotel.  The husband came by to retrieve the present…carefully NOT in uniform.  The saddest photo we did not take was of a line of police horses waiting to go on duty with plastic face shields to protect them from projectiles. 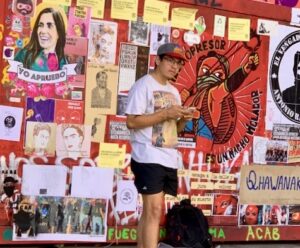 Wall with Messages from Individual Protesters.

Oddly, though, Chile is still seen as the land of opportunity to many in Latin America.  Many of the shop keepers, cleaning staff and Uber drivers we met were from Venezuela, Haiti and other nearby countries.  Not being citizens, those foreign workers just kept their heads down and hoped their jobs would not be affected by the protests. 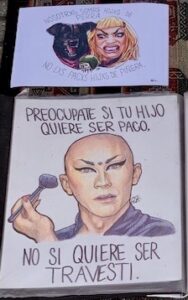 The hope of everyone we talked to lies in the writing of a new constitution to replace the one written during the Pinochet dictatorship.

A national vote is scheduled in April to commence this rewriting and is expected to pass.  Everyone seems to see the process to be a magic pill which will bring order to the chaos.  We just hope the new corona-virus-lockdown does not postpone this important vote.  Chile needs a new start. 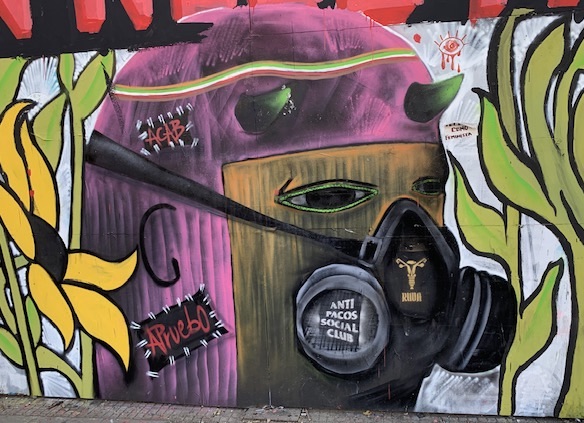 Thanks. Sad but appreciate the update. Donna Dunning

Amazing images you guys!!
Thank you for the insight
Quincy

Having lived through the revolution in Cuba and leaving because of it, I worry about Chile’s people and culture. The reality of the situation usually is somewhere in the middle. There was a good reason for Castro to exist, however, once he became the supreme leader, things went from bad to worse. I hope Chile can harness the ideals of revolution without destroying itself.

Thanks so much for this colorful, albeit disturbing blog. You always make a situation interesting and bring us right along with you. I can’t wait for the next report!. Meg

Thank you so much for sharing your experiences and the political unrest in Chile. I study symbolic images in history, and I greatly appreciated reading of how events and actions in Chile have led to a symbolic language in art expression. Art becomes a means of claiming power over loss, such as in the symbol of the eye in response to the loss of eyes. The image of “mata paco,” as the canine hero, is also an action of claiming power through visual narrative. When events seem beyond one’s control, art provides a means to shift the national and sometimes global consciousness. Art comes to the rescue in the most difficult times, and provides a means for uniting people together.

Wow. That is really interesting. Thank you for your comment! Sharon

Patience is required. A new constitution could help the Chilenos work things out as they have before.

Thank you for sharing your travel adventures.

Thanks for sharing the updated political profile of Chile. The reader feel like accompanying with the writer. Unfortunately this is the delima of many if the third world countries. Even in some countries, the so called democracy is worse than dictatorship.
I really have sympathies for the people of Chile and wish if they could have right to choose leadership of their own choice.

The pension system was designed by US Chicago school (Milton Friedman) economists. It failed to take into account that many Chileans work in the “cash” economy, don’t receive a paycheck, and therefore don’t contribute. It also failed to provide a progressive government match to ensure that low-wage workers received a livable pension in retirement.

From a policy viewpoint, fixing the system is not design-difficult. It does take some political will to pull off. I am concerned that a constitutional convention is as likely to magnify the fractures in Chilean society as resolve them. I’m keeping my fingers crossed.

Thank you for allowing us to see through your eyes. Sharon, I had no idea until now, what the Chileans were going through. Yet, when I first opened your sight, I was stunned at the beauty of the colors used in their art. In a time of peace or time of war, the artist speaks for the masses. As I read through the comments I felt compelled to respond. Although the World may indeed be going through (as you called it) a “reboot”, this article is focused on a specific part. Thanks to your article, it’s now a part that we can tangibly see and feel. Not just watch from a distance on the news.
And, although the commentators are correct about the corrupt government, the historic ramifications, etc. My heart is drawn to that individual who has the courage to stand up against a monstourous injustice to the point of giving up their own life. My heart breaks for the mom, child, and family who will still be there in poverty after the death of their hero. Lord, may you raise this generation into a time of peace and equality. Amen