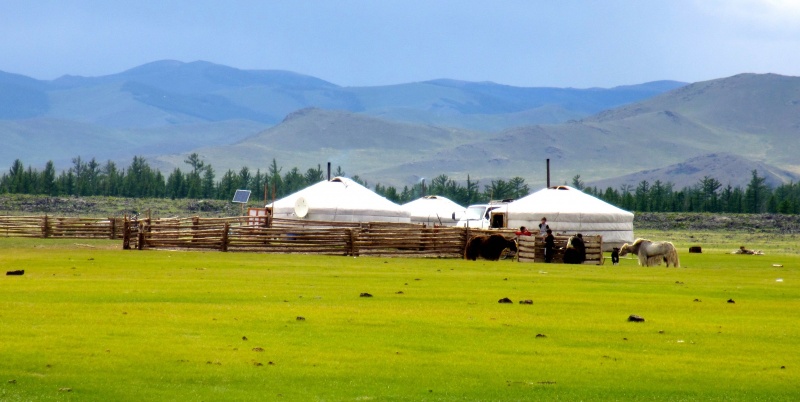 Mongolia is a wonderful country whose vast landscapes are scattered with round portable nomad tents.  The majority of the Mongolian population call theirs “gers”, but the minority Kazakh people in far western Mongolia call theirs “yurts”.  Kazakh yurts, however, should not be mistaken for Mongolian gers.  There are a number of differences. 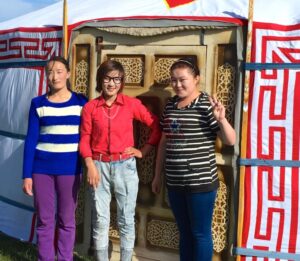 The two nomadic dwellings rang from the same sources, but have developed differences over the centuries.  In contemporary Mongolia, you often see a mix of gers and yurts in tourist camps.  During my June visit, for example, I stayed in Kazakh yurts in camps around Ulan Bataar, and I stayed in Mongolian gers in camps in the far western Kazakh areas of the country.

At first seeing the two dwellings side by side they seem identical.  The most significant difference between the two is that the wagon wheel-like center roof support of the ger is held aloft by two wooden poles extending from the floor of the ger to the roof wheel.  These two poles support the weight of the roof. 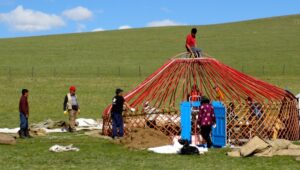 A yurt, however, has no center poles, so the entire weight of the roof is carried to the lattice walls by the wooden spoke-like ribs from the center roof wheel.  This means that the slope of the yurt roof is more steeply pitched than its ger cousin.  This difference is immediately noticeable from a distance by the different slopes of the roofs. 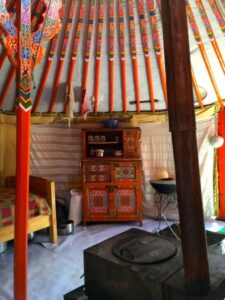 Traditional interior decoration is quite different as well.  The Kazakhs make a wide variety of embroidered items and colorful hand-rolled felt rugs and other handicrafts.  The Mongolians prefer to decorate their roof ribs and center poles.

Why was the construction of the yurts and gers different?  The only explanation I heard was that Genghis Khan’s army hauled huge gers on wheeled platforms pulled by dozens of oxen, and such large dwellings HAD to have had roof supports. 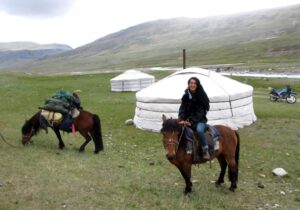 In modern times, the sizes are the same, and each ethnic group naturally swears that theirs are the better design.  During my trip, I helped set up both kinds.  In my humble opinion, the  ger, with its two center poles, is easier to set up.  The Kazakhs are right, though, that those same center poles can become a hazard to an American tourist like me trying to exit in the night after drinking too much fermented mare’s milk. 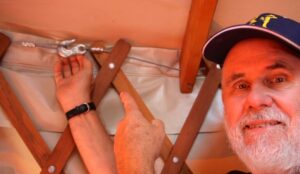 We also have gers/yurts in America.  Numerous state parks offer rental yurts.  We exhibit a full-size yurt in the summer in the driveway by our shop on Whidbey Island.

The American design has the fantastic innovation of a steel cable along the lattice wall that bears the weight evenly.  It is so efficient that I can set up ours by myself in less than 30 minutes.  In contrast, it takes a crew of 6 or 8 to set up a Mongolian ger or yurt. 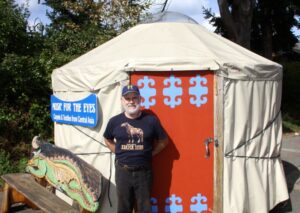 To exhibit American yurt technology to the Mongolians, The U.S. Embassy in Ulan Bataar has a U.S.-made yurt on display in the embassy courtyard.  Oddly, no Mongolians seemed the least bit interested in its technological  improvements.  The viewpoint seemed to be, “What was good enough for Genghis Khan is good enough for us.”

Virtually every ger and yurt on the steppes in Mongolia seemed to have a solar panel to generate electricity and a satellite dish antenna for the kids to watch international TV.  I wonder what Genghis Khan would think of his forebears watching Sesame Street and the Muppets on satellite TV, rather than getting on with conquering the world. 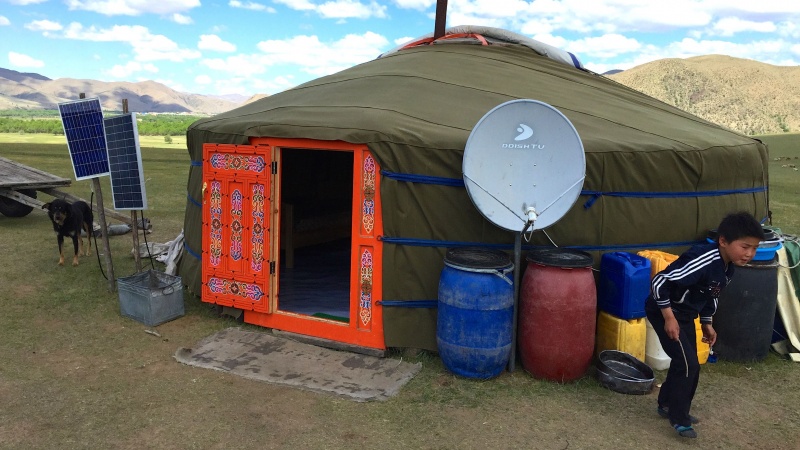 Descendants rather ten forebears? Perhaps the Mongolians like the communal activity of setting up a yurt — rather like barn raising?

Thanks Fred, your posts are always good ones..

Interesting to read and know about the difference between the two kind of dwelling. Was the american version used in the windy desert of Mongolia? I could see the cable become a dangerous slicing projectile.

It is, indeed, one world…..”The whole world is watching” was true-ish in 1968 but really really true today!

I love those beautiful red doors! Thanks for the interesting info, and the visuals.

« Driving in Mongolia
The Far Corner of Mongolia »