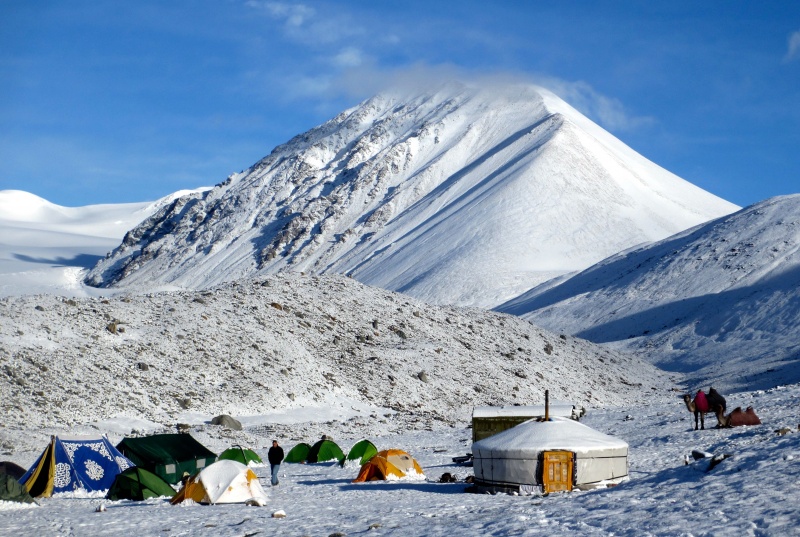 Our Base Camp after the Blizzard. © Fred Lundahl

People who have been visiting our shop since our trip to Mongolia this June have been happily shopping for our unusual felt slippers, 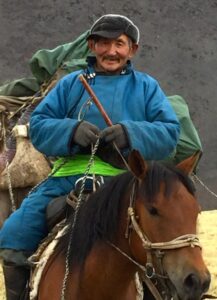 as well as colorful purses and bags decorated with elaborate hand-embroidery.  Where are they from?  They are all made by Kazakh-ethnic women who live in the mountainous far-western corner of Mongolia.

Fred and his friend Jeff visited this Mongolian corner and spent almost a week in the Kazakh-majority far-western province of Bayan Olgii.  They went trekking in Tavan Bogd (the “five saints”) national park in the Altai Mountains.  This park contains the highest mountains (over 14,000 feet) in Mongolia, massive glaciers, and beautiful lakes fed by rivers running from these glaciers. 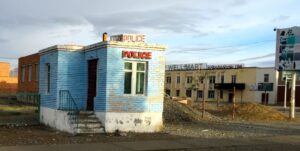 It took a 3 1/2 hour flight from the national capital to reach Bayan Olgii, the little capital of this far flung province, and we landed at an airport nestled in grasslands with mountains all around.  We stayed at a new small hotel run by our tour company.   There we were reminded what an adventure travel destination Mongolia has become when we met a variety of foreigners…including U.S. Peace Corps volunteers and their visiting parents who knew about the whale advocacy organization “Orca Network” in which Fred is actively involved. 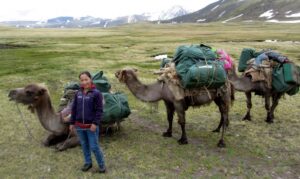 Our wonderful young woman guide was also an English teacher in a small town nearby.  We drove up the road-less white river valley to the base of the Tavan Bogd mountains and spent several days trekking up to the base camp from which climbing expeditions are launched.  In addition to Israeli horse trekkers, and a fellow Washington-state woman traveling solo on a camel, we ran across a group of French tourists who had just climbed the most accessible of the five peaks. 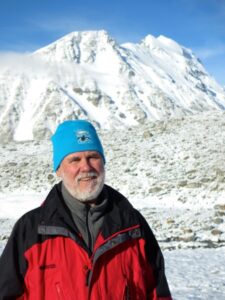 Fred at Base Camp with Orca Hat.

Unfortunately our plan to climb the same peak was cut short by an unexpected late June blizzard that dumped snow on our camp.  The snow covered the crevasses in the glaciers, making it too dangerous to try an ascent.

Instead, we moved south to visit the glacier-fed lakes of the national park, driving for hours on meandering rough tracks through roadless valleys totally devoid of any living thing.

In addition to the Kazakh people who make up the majority of the population in this area, there are a variety of other minority groups, including many Tuvan people whose homeland, famous for its throat singers, lies across the border in Russia.  Like Nobel-prize-winner Richard Feynman, author of “Tuva or Bust”, we also were prevented from crossing to Russia because of poor relations between Russia and the U.S. 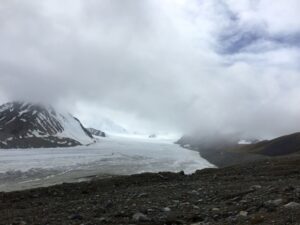 We did meet Tuvan weathermen at the Tavan Bogd base camp who accurately warned us about a coming blizzard.  They welcomed us into their “ger” made toasty warm with a camel-dung-fired iron stove.  Their detailed explanation of the heating qualities of various animals’ dung made us understand the bumper sticker we saw that said, “You can never have too much camel dung.” 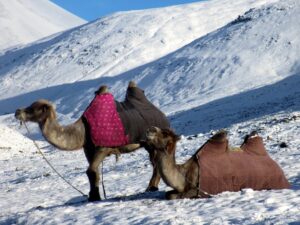 Still, the majority ethnic group in this province is the wonderful Kazakh, many of whom have ties to Kazakhstan.  They taught us both the Mongolian AND the Kazakh national anthems.  As we pointed out in our last blog on Kazakh yurts, these folks decorate their dwellings with beautiful embroidered textiles called “tuzkiiz.” 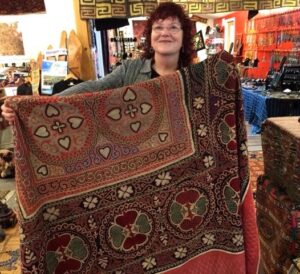 Our Fair Trade partners, “Mary and Martha” in Ulaan Bataar, use fragments of vintage tuzkiiz embroidery and encourage Kazakh women to make new embroidery for their products.  In addition, the Kazakh tradition of felt making, originally for yurt coverings and rugs for warmth, has morphed into the making of wonderful felt slippers and small figures that have proved popular in our shop.

This far corner of Mongolia, sandwiched between China and Russia, is very different in many ways from the rest of the country.  Everyone we met there was very happy to call himself Mongolian.  These people were pleased to be part of a democratic country, rather than a part of any of their authoritarian neighbors.  And their handicrafts!  Their wonderful handicrafts! 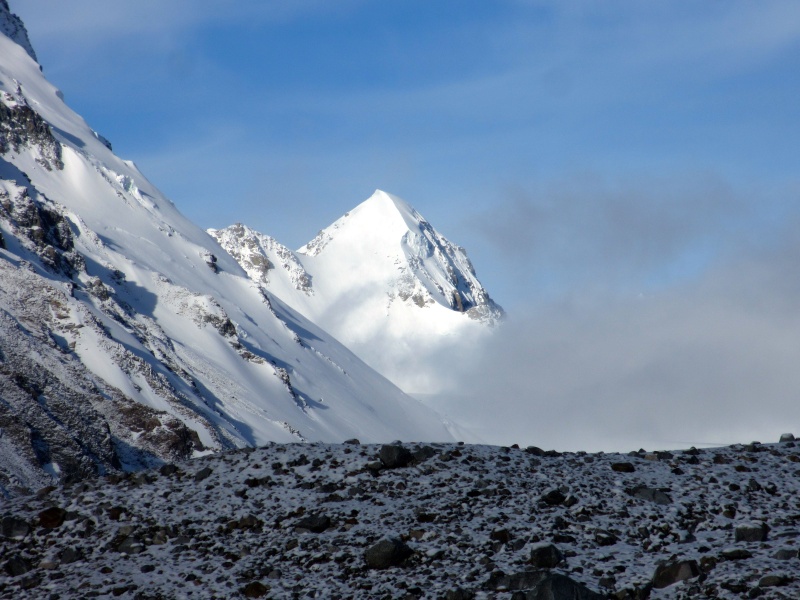 Thanks for another interesting newsletter and great photos! I haven’t been in that part of Mongolia, but those mountains look gorgeous. Regarding the beautiful “tuzkiiz” Sharon is holding: do you have any close-ups of the embroidery? Is the whole surface embroidered? How thick is it? Are they mainly for walls, or for blankets, or for rugs? Are they similar to “suzanni ” in Uzbekistan?
Thanks again!
Muriel
Portland, OR

Visiting Langley from Chicago last fall was a delight! And shopping in your store was the highlight! Thanks for blog-sharing all your adventures. Gives us ideas of where and how to travel. I enjoy the jewelry that came home with me – it makes me smile every time I wear it!

Enjoyed this blog.
Looking forward to hearing about your trip to Patagonia too. When do you return? I might give you a call if it is prior to my departure.

Absolutely wonderful posting, Fred. You have re-whetted my appetite for Mongolia. I didn’t realize you could fly to Bayan Olgii. That makes all the difference. Beautiful photos and a beautiful wife to boot. Meg

Thank you for sharing your travels with informative and interesting text and pictures. We always visit your store when we are in Langley.

What a fascinating trip. It adds photos and ideas to the Genghis Khan biography. Thank you.

Sharon and Fred,
Enjoyed the blog and sorry you could not get to Tuva. There is a group that comes here to Fort Worth,Tx frequently. What a fabulous trip! I would like to add a Mongolian eagle hunter’s fur hat to the collection. Did you see any? Thanks for sharing, Sharon. You too, Fred.
All the best!!!! HatDoc

Fred so great to hear about your travels . I retired almost 8 years ago. I still remember you teaching me Eskimo rolls in India. Look forward to reading about your next adventures. Mark

Enjoyed reading about this Mongolian adventure, Fred.
Breathtaking pictures and interesting comments about your travel adventures and the people and experiences along the way.
Thanks for all you do to make Langley such a special place.
Sincerely,
Fred