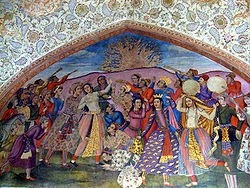 The ancient Zoroastrian spring equinox festival Nowruz  was once again celebrated in Seattle  this March 21st by both the local Iranian and Central Asian communities.

The Central Asian event, for which we loan textile decorations, was again hosted by the Seattle-Tashkent Sister City Association which celebrates its 40th anniversary next year.

Since the name of the festival–which means “new light” or “new day” in ancient Persian–can be transliterated into the latin alphabet in several ways, we choose to use “nowruz” . (A school kid was

disqualified from the national spelling bee in 2006 for using  this (Random House) variant rather than  Webster’s “navruz” spelling.)

Nowruz has been celebrated for thousands of years as the beginning of the new year and the end of winter.   The 500 BC King’s Palace at Persepolis in Iran is constructed so that on the  day of the Spring Equinox, the rising sun’s rays flood through the doors of the throne room and illuminate the throne.

The festival brings communities together for feasts,  dancing and gift-giving.  There is even a Santa Claus–like  figure called Haji Firuz,  thought to represent the Sumerian god of sacrifice, who dies every autumn and is reborn at the spring equinox.  A number of festivities taking place involve fire and the other basic elements, a holdover from Zoroastrian days even in fundamentalist Islamic Iran.

The coming of various other religions such as Islam to the area of Persian influence from Turkey to China did nothing to diminish the popularity of the festival which heralds the coming of spring.

Only the Russian communists in their efforts to stamp out religion succeeded in banning the celebration in the Soviet Union for a time.   Finally, with the coming of “perestroika”, the Central Asians succeeded in being allowed to commence their Nowruz celebrations again in 1988.

Nowruz is the most popular festival in Iran.  It is celebrated from Albania to Western China to Afghanistan to India and is equally popular among all Turkic speaking peoples.  In 2009 Navruz  even became an officially recognized holiday in Canada.  Can the US be far behind?

This is a You Tube performance of “Happy Nowruz” of the Silk Road Dance Company, which will perform at Seattle’s Asian Art Museum on May 5th as part of the “Colors of the Oasis” ikat silk exhibition… for whose education room we have donated some ikat textiles.

It is always good to learn new things. Thanks.

Learning new “things” is never ending. Thanks for sharing. Living in Taiwan I was introduced to many new festivities – always interesting.

Thanks for giving us more information about the Nowruz festival. Peter saw an article about Nowruz in the doctor’s office in Time magazine. Fortunately–or unfortunately–he didn’t have tinme to read it. We will pick it up elsewhere.

It’s really most interesting to learn about other cultures to understand them better.

Hope to make it to your store again sometime this spring.

[…] Thus the celebration of Navruz in today’s Tajikistan becomes something more than an expression of joy at the end of winter and coming of a new harvest season. It separates Tajikistan from its past, when Navruz was banned in Soviet times. […]

« MUST SEE…”Colors of the Oasis”
What Do Afghans Think? »