Istanbul is one of the world’s truly great cities…and our favorite tourist destination.  As it contains thousands of years of history–and 20 million people–it is impossible to capture in a few words.

Istanbul has Byzantine walls and churches, Ottoman mosques and palaces, and modern buildings.  It sits where Europe meets Asia.  It has been important long before 330 AD when Constantine the Great chose it as his capital of the Roman Empire. 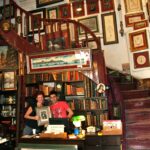 We spent a day cruising on the Bosphorus and the Golden Horn with our traveling partners Keith and Shevaun in the new boat of our old Turkish friend, Ali Hashimi.  Ali owns our favorite rug store in Turkey, “Noah’s Ark” and has just renovated an old mansion into a new boutique hotel in Stamboul, also called “Noah’s Ark”.

The shop and the hotel are in Sultanahmet, 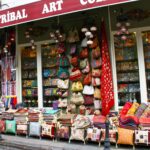 all within walking distance of the Blue Mosque, Topkapi Palace, the Grand Bazaar and (Fred’s favorite building in the world), The Aya Sofia.

In addition to the mosques, palaces and hamams (Turkish baths), we love the 19th century timber-built houses of Istanbul, some of which were built along the shores of the Bosphorus for the nobility and foreign ambassadors, and others in the 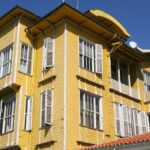 city.  In those days, overhanging eaves and windows with grills let women look out on the street without being observed.

For a good book that captures the atmosphere of the old city,  we recommend reading  “The Janissary Tree” by Jason Goodwin, set in the Ottoman empire’s declining days in the 1830’s.

I love shopping in Istanbul, so we came back with a treasure trove of silver and precious stone necklaces, as well as bags of bargain finds from the flea markets.  Fred went crazy buying hats of all kinds, and new rugs are being shipped to our store in Langley.

Hi!
These pictures are amazing. I think you should take your only daughter with you next time!
Love,
T

And me! You have to take me with you too!

Beautiful picture of Topkapi and Aya Sofia; you could be a pro Sharon. Great city!

One could easily spend a day at that book store – looks interesting.

Thanks for this. Great trip. I’m envious. Mike

we missed you; glad you had a great time! can’t wait to see all the treasures.

It is amazing and informative. i wish to be with u people in this trip. u really expose treasure from this part of the world. wish u to continue.

Effendi,
I had trouble with the maths but took my shoes off. So where are my photos of Sinop? Spent a whole year of my life there in 61-62.

Neat stuff! I should go back sometime. I think I would appreciate it more as an adult.

Looks like a great place to visit. Definitely going on my list. Hope you two are doing well and enjoying being back home for a while.

« Conference on Oriental Carpets
The Midnight Bus to Safranbolu »