A customer visiting our shop, Music for the Eyes, hearing we were going to Turkey again, said that their favorite place outside of Istanbul was the little restored Ottoman village of Safranbolu, near the Black Sea coast.

Always looking for new places to visit in Turkey, we took the midnight bus to Safranbolu .   Already tired at 12 PM, we got on the wrong bus twice.  Luckily the Turks are great, so that even though no one spoke English, they carried our suitcases and directed us to the right seats on the right bus.  The trip was quite nice, but Sharon didn’t much like the Eastern-style bathrooms at the rest stops, which were your basic hole-in-the-floor models. 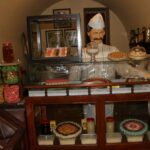 The bus arrived at the town square 45 minutes early, and it was not yet dawn.  We woke up the surprisingly pleasant B & B owners, and were shown to our wonderful room with a wooden carved ceiling.

Safranbolu takes its name from the saffron flower and top-quality saffron produced there.  The usable part of saffron is the seeds of the flowers;  80 thousand 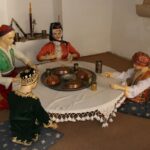 flowers produce only 1/2 kilo of saffron.

The town of Safranbolu dates back to 3000 BC .  The Gasgas, Hittites, Sumerians, Lydians, Persians, Greek, Romans, Seljuks and the Ottomans have all ruled in Safranbolu.

Its old city is famous for its half-timbered buildings with their tile roofs and overhanging second storeys.  These traditional wooden houses are beautifully preserved, and Safranbolu has been declared an UNESCO world heritage site.

It is also built on an interesting geological structure which joins three separate canyons…and contributes to the beauty of the city.  We spent our days wandering around and exploring; the city was so well preserved that it felt like an open-air museum.  The only tourists we saw during our visit were young Chinese, traveling in groups on a Chinese holiday.

One of the most interesting shops on the metal-workers’ street was that of a friendly Turk who was proud of the fact that he had exhibited his work in at the University of Maine in the Hudson Museum in an exhibit of Turkish metalworkers.

Fred and Sharon,
You are among the most adventurous people we know.
Taking the wrong bus twice at midnight and dealing with the limited facilities.
This was a very interesting story.
You both have led and are leading fascinating lives.
Your travels are interesting to follow in your pictures and words.
Sincerely,
Fred and Shannon

Hi Sharon and Fred,
Always enjoy hearing about your travels. I am studying “Galatia” now in BSF.

So much to see and learn on this planet – somewhat overwhelming. It is nice of you to share.
Sandra

What, afraid of a bombsight toilet! Shame.

Fred& Sharon, Thank you for letting me learn more about our world. Your adventures add the extra touch I need when I return to the classrooms to teach world events.

Wow…sounds great.
Love to you both!
Linda and Charles

great blog posts as you travel–My husband and I met Fred in your shop in Sept. and enjoyed talking with him while we feasted our eyes for an hour or so. We wouldn’t have found the “ancient cedar” without his directions! I just referred my friends to the shop when they go to Seattle around Thanksgiving –will the shop be open then?