The Uzbek-speaking Lakai are the only real nomads remaining in Central Asia.  Some Lakai, and their closely affiliated groups–the Kungrat and the Mangit–have settled into villages in Uzbekistan, Tajikistan and Afghanistan.

A thousand or so Lakai, however, still migrate with their herds of animals and complete households every summer from the hot plains of southern Tajikistan to summer pastures in the mountains of northern Tajikistan.  When winter approaches, the Lakai move again to the southern plains. 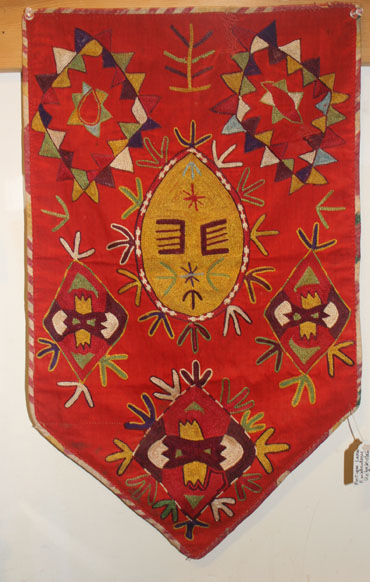 Their migration route takes them straight through the Tajikistan capital of Dushanbe, where police block off streets to allow huge herds of animals and numbers of nomad families to move through the city.  The Lakai have camels, horses, goats and sheep, but move their households of tents, clothes, furniture and cooking utensils by truck rather than on pack animals now.

The Lakai, at least since the Russian Revolution, have not woven carpets…probably because they have few sheep, preferring goats in modern times.  They have become–instead of rug weavers–accomplished embroidery makers, using several different embroidery stitches with bright primary colors of silk thread. 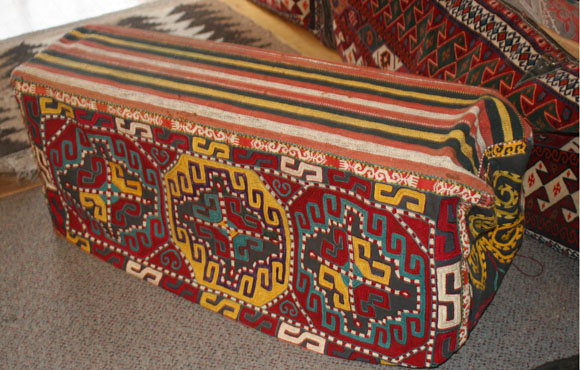 My husband and I purchased a Lakai embroidery when we visited Langley late last summer. It now is a colorful tapestry on the wall in my husband’s office. I think of all those hours spent making it, and we only bought a panel of a larger piece.

I enjoy reading your travel logs. Have you ever thought of visiting the Same Nation, or Lapplanders, in the northern of Scandinavia? They are reindeer herder and also live a nomadic life. Their colorful traditional clothes, their reindeer skin shoes, bone tools and basket work in bark are quite beautiful.

Thanks, Fred and Sharon;

Your piece is a fascinating look at a culture that informs us of the past. Their embroidery certainly appears to carry on the traditional designs and is a way for the rest of us to support their culture and have such beautiful art in our own lives.
I look forward to more of your very interesting posts.

Loved the picture of the Wakan Valley on the website. I must say, it brought back great memories of a wonderful trip!