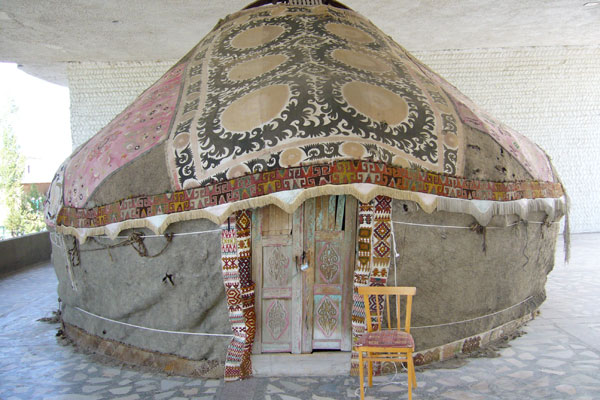 The Lundahls love yurts.  Living in Central Asia, where the people have lived in these round portable tents for centuries, the owners of “Music for the Eyes” have slept in yurts, have eaten (mutton) in yurts and have drunk (fermented horse milk) in yurts.

Along the way, they have collected a large number of yurt bands, yurt rugs and yurt hangings of many kinds—all of which can be seen in their shop on Whidbey Island in Washington State.

When the Lundahls lived in Kyrgyzstan, one of their best friends was Fikret Ozdin, whose business, “Asahi,” produced modern versions of Kyrgyz felt, weaving and embroidery.  Upon their departure, the girls in Ozdin’s workshops made the Lundahls a fantastic model yurt, complete with tiny rugs, wall embroideries, and little people and animals.

In 2007 another friend, Richard Isaacson, put on an exhibition “Architectural Textiles: Tent Bands of Central Asia “ at the Textile Museum in Washington DC and wrote a wonderful accompanying text.     He asked for the Lundahls’ model yurt to be used as an illustration of this home of nomadic Kyrgyz.  In fact, the model yurt traveled to Washington D.C. and, reportedly, was a star of the exhibition. 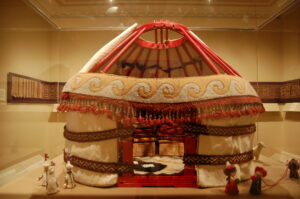 What we call a “yurt”… Isaacson says is better described as a trellis tent.    Because the wooden struts could be taken down from the roof wheel fairly easily and could be transported to and from high mountain pastures, the trellis tent facilitated the life of nomads in Central Asia for more than a thousand years.

What are yurt bands or  tent bands?  First, they are structural components which wrap around the wood poles and strengthen and hold them together with tension. 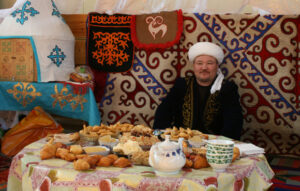 Kazakh in Yurt with Food for Guests © Engle & Smith_flickr

Second, the Kyrgyz wove decorative bands, sometimes with dangles, just for their beauty in the yurt.  If you visit our shop, or even our home, you will see that we have used these beautiful bands for that purpose.  They are often about a foot wide by 50 feet long and were woven on a narrow loom on the ground.   They could take as long as a rug to weave, even up to from one to three years.

Check out this link for a video on the exhibition of tent bands:

These bands,in addition to being functional, are beautifully created. It tells you alot about the people. Very interesting. Also, the video in Washington, D. C. displaying these bands was great. Thanks for sharing.

I have been loving all your postings. Thank you. Barry