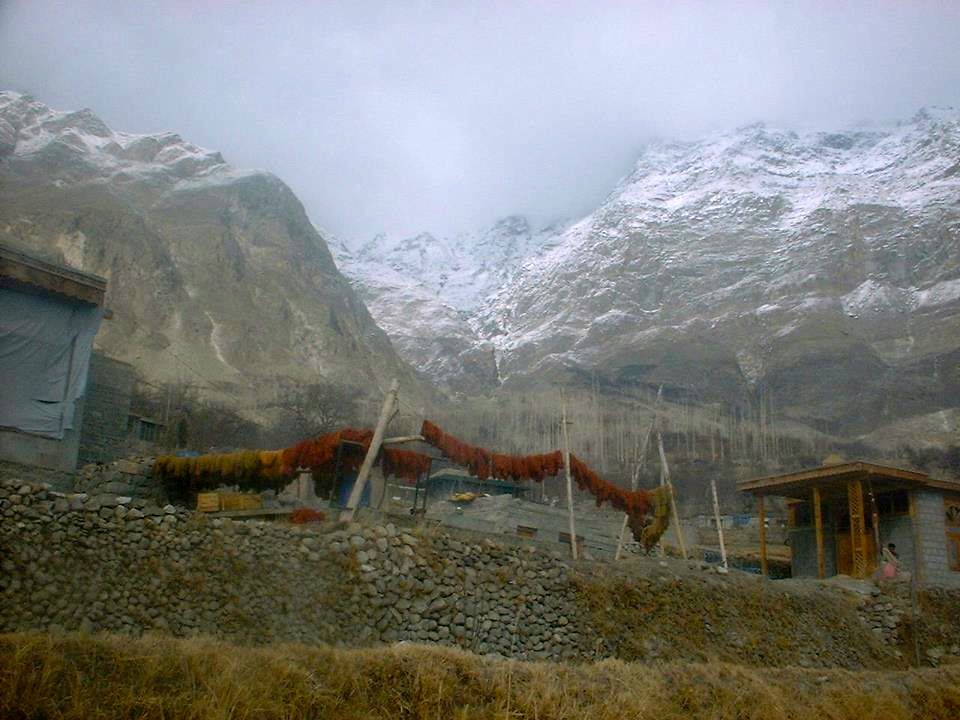 Our own interest in Hunza began many years ago in Africa when we began to meet Moslem friends who were followers of the Aga Khan.  These members of the Ismaeli Shia sect are the most liberal of all Moslems, and they often spoke about their homeland in the high mountain valleys of Central Asia.

The current Aga Khan has an estimated 15 million followers in more than 25 countries.  Their community supports less fortunate members in remote areas through humanitarian programs and successful world-wide businesses like the five-star Serena Hotel chain. 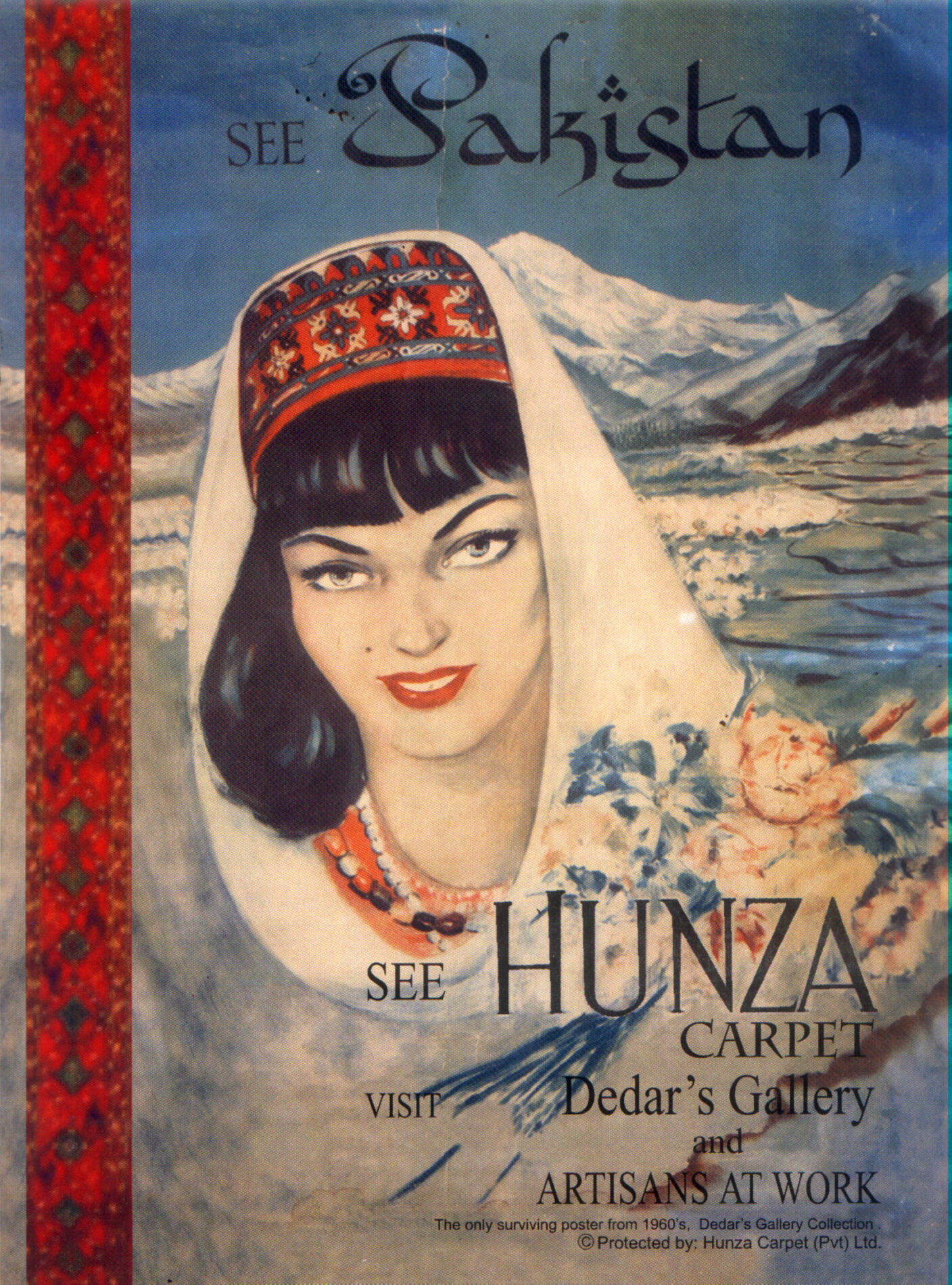 Sharon met Didar Ali, an Ismaeli from Hunza, when she was working in the Islamabad Embassy about ten years ago.  We started to buy wool needlepoint cushions made with natural dyes by women in his workshops to sell in the first years of our shop, Music for the Eyes, in Langley.

Traditional weaving in Hunza was historically quite basic — limited to a few village elders making coarse goat and yak hair rugs.  The Aga Khan provided support for the Hunza workshops dedicated to the training of young women, under Turkmen master weavers.   More than 250 women are now skilled carpet-weavers and earn decent wages. 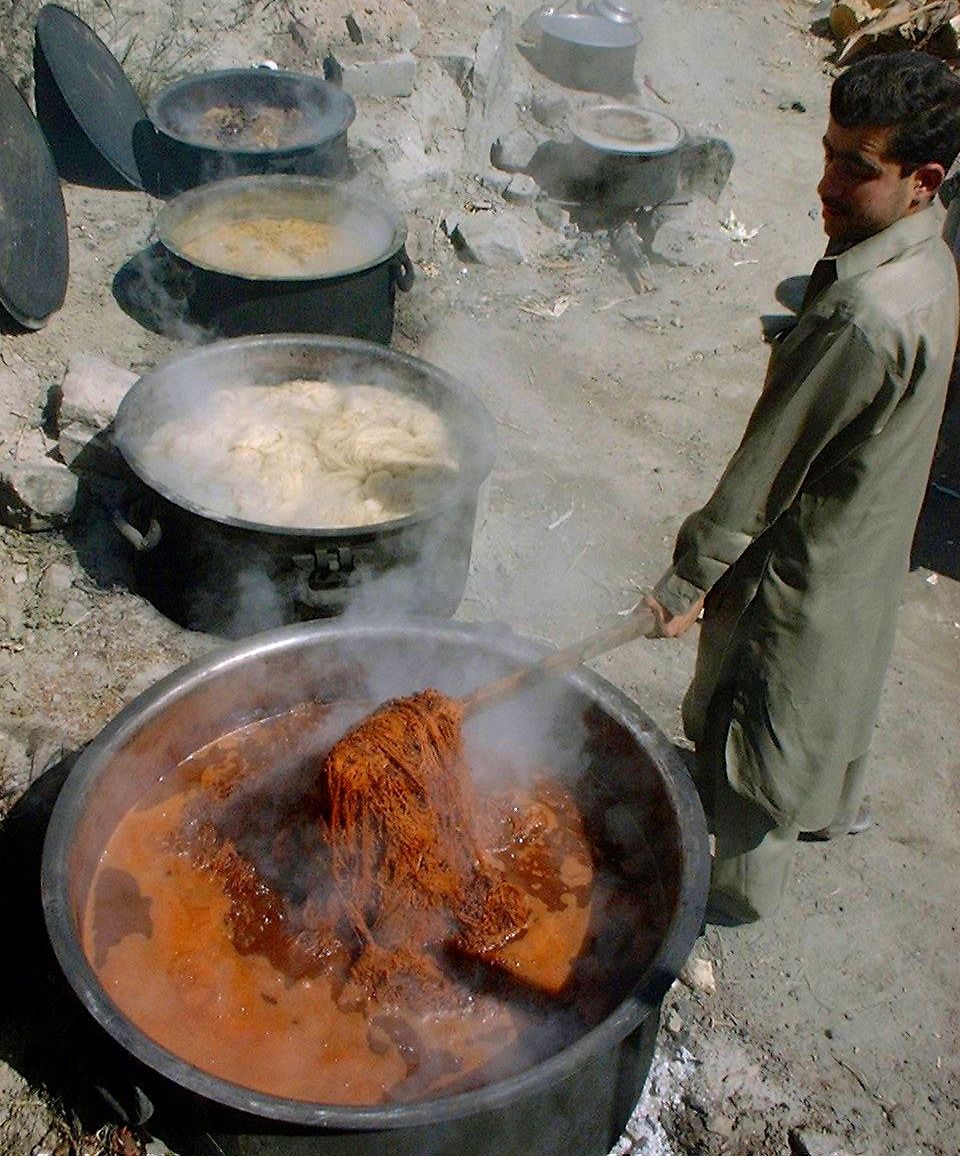 Even in the best of times, there are almost no  jobs in Hunza.  There are few natural resources and almost no exports to support a growing population.  The bad publicity resulting from extremist acts in other parts of Pakistan has drastically affected tourism.

In January 2010 a landslide buried an entire village in the Hunza Valley and hit three villages directly. The debris caused a natural dam across the river and destroyed most schools in this area. 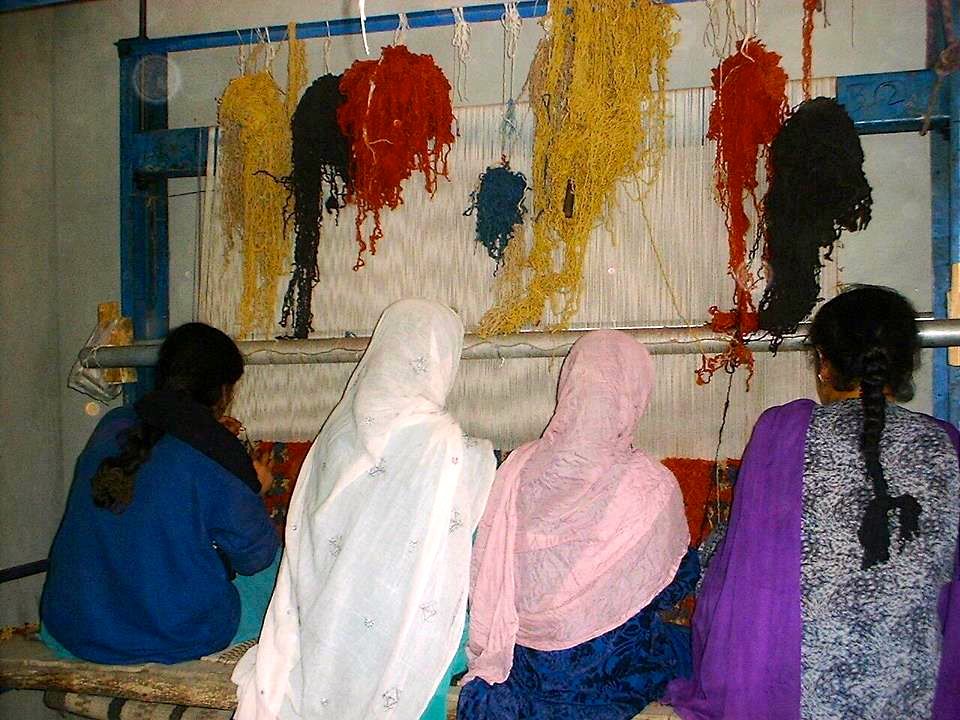 In response to the resulting hardship, Didar Ali emailed us and asked us to buy some rugs.  We were able to send him pictures and colors we wanted, and his weavers created a new series of stunning gabbehs with natural dyes, intense colors and modern designs.

Even though we weren’t able to visit the Hunza workshops on this trip, we were able to send some boxes of books to schools where Didar Ali’s wife is a teacher.  We learned that at least 3/4 of the people in the Hunza Valley (and virtually all young people–including girls) are literate.  This is in a country where only about half of the whole population is literate, and millions of girls are blocked from attending schools.

This education has contributed to the high status of Ismaeli women.  Women and girls can even stroll bazaars alone at night without a problem, unlike in the extremist areas of Pakistan. 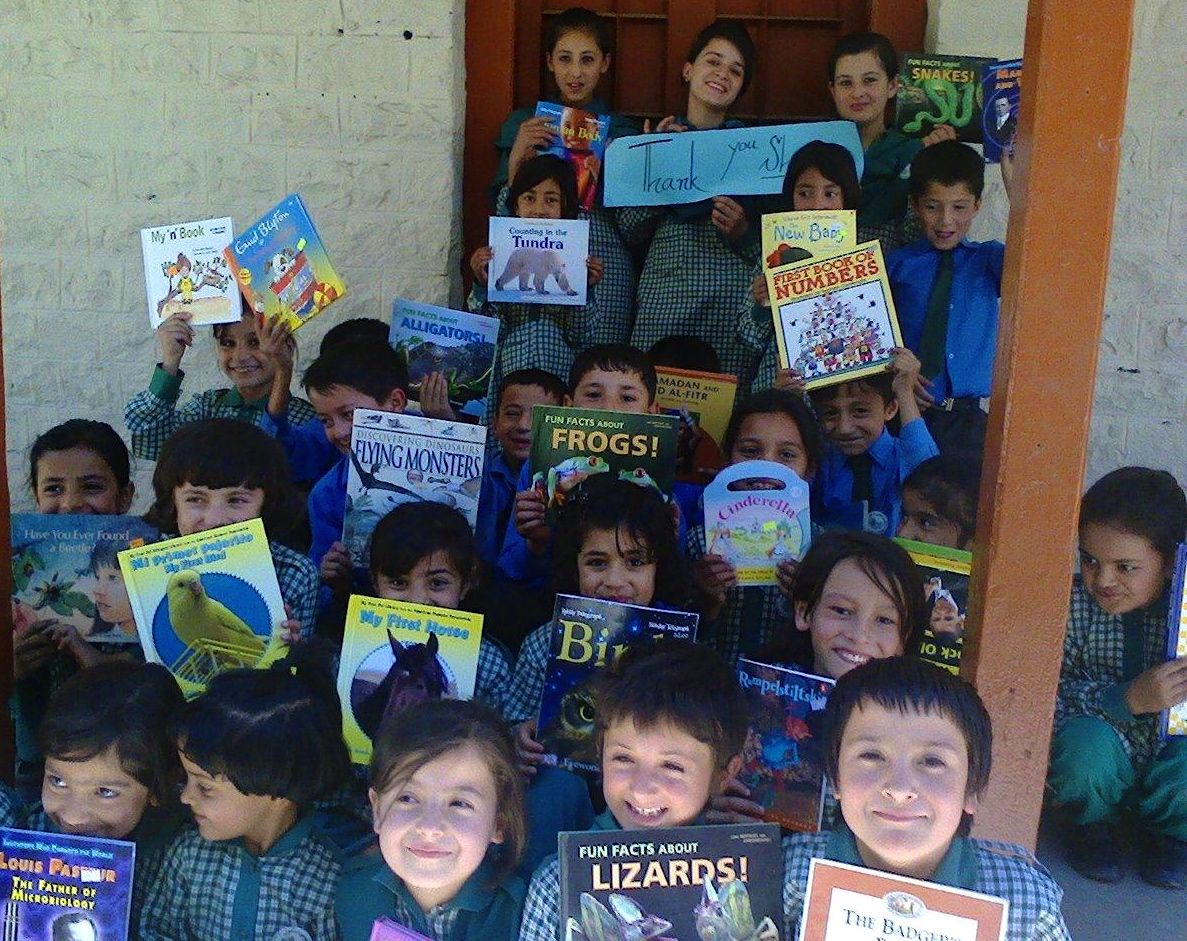 Schoolchildren in Hunza with the Books we Sent Them. © Didar Ali.

This foreshortened visit to Pakistan has been our most “eventful” trip in many years.  Perhaps we were naive in thinking we could visit all our friends and avoid bumping into the troubles of the region.  What we learned, sadly, was that extremism, whether left or right wing, whether Moslem, Christian, Buddhist or Jewish, has engulfed our world and made it increasingly difficult for the 99.9 percent of us who are not on those extremist fringes to live our lives, to raise our families, to weave our carpets in peace.

We will always be haunted by the image of the friendly young Pakistani children, amazed at seeing a foreigner, waving goodbye to us as they climb on board their school bus…and the bus door is closed by their armed guard carrying a machine gun over his shoulder. 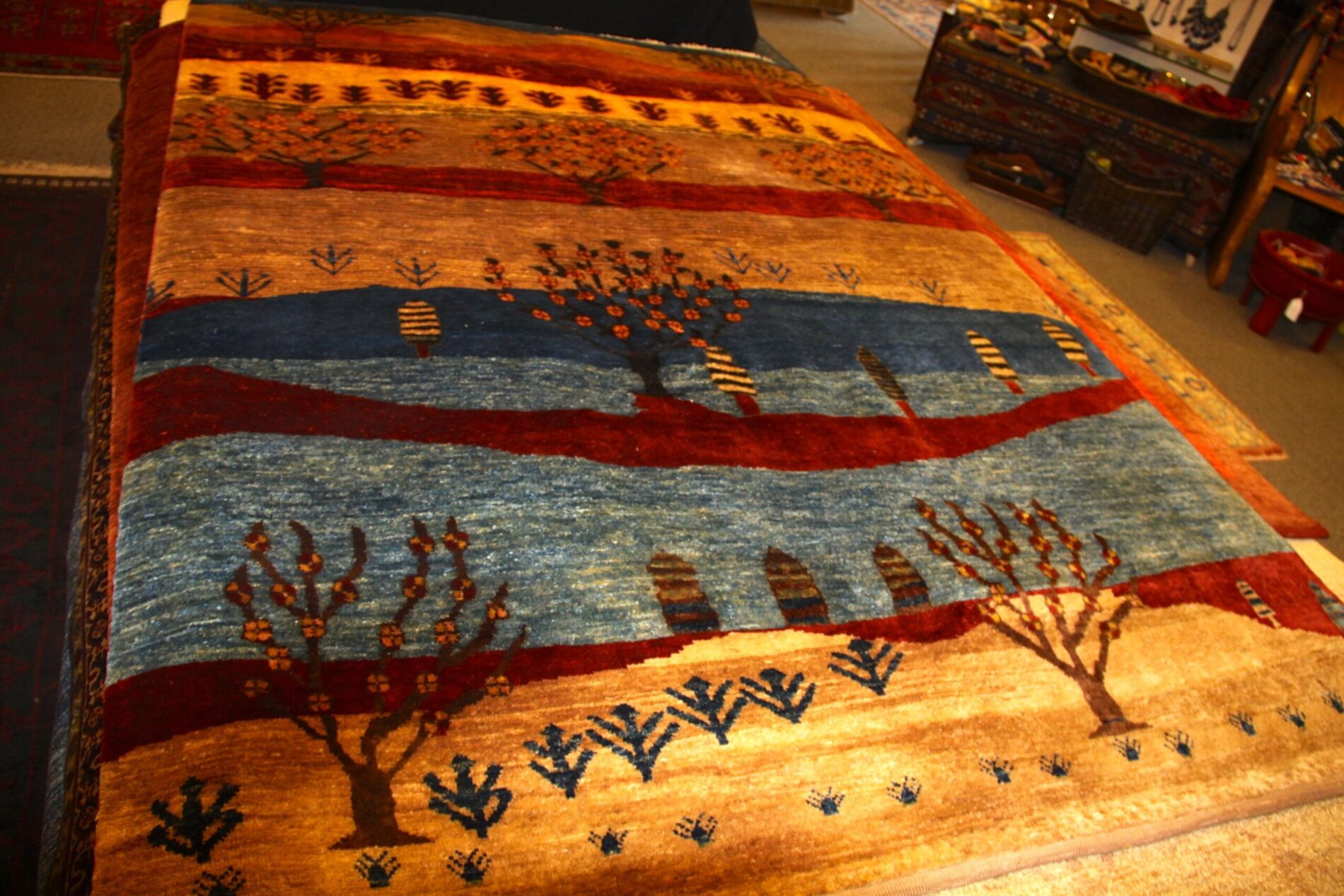 Rug Made in Hunza for Music For The Eyes

Didar Ali is an impressive person – apparently educated as his wife must be too. He has made an magnanimous contribution to humanity by providing jobs and education for many. Always enjoy these short, educational glimpses into other countries. Thank you.
What type of books do you send to them? Age level?
Assuming in English.

Kids with books about animals….wonderful. Such books can engender a love of wildlife and respect for nature; both desperately needed worldwide.

Didar is one of the nicest & most humorous men I’ve ever met. It is delightful spending time with him and his generosity with visitors is superior. He is proud to be from Hunza & has not lost his appreciation for his humble roots. I admire Didar & his wife Pari very much.

Thanks to all of you and Sami,for your kind words, and appreciating our work from the mountains of Pakistan, This part is peaceful and beautiful as Sami has visited us several times.

Dears,
Thanks for the opportunity to read such a wonderful blog which is really a music not only for the eyes but also for the mind as well.

Wonderful story! This is proof that carpet is a smart choice from the beginning until now. Many people love the benefits of having a carpet installed in their homes.