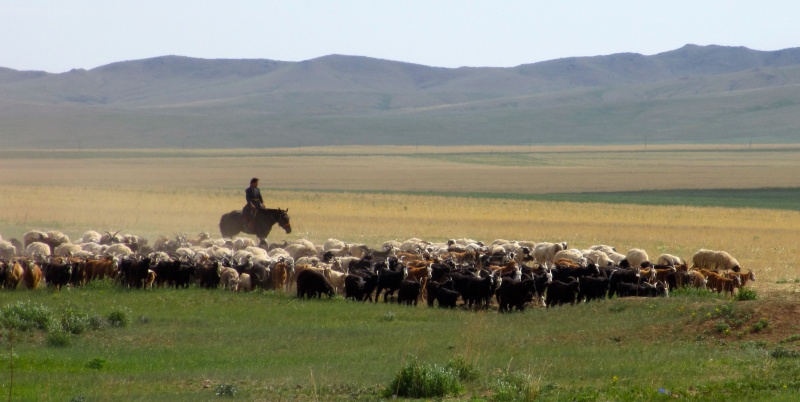 Fred and Sharon, former diplomats, have never lived in Mongolia.  As a long-time repressive client state of the former Soviet Union, the U.S. didn’t even formally recognize the country until the late 1980’s.  As a result, there was no U.S. Embassy in Ulaan Baatar (Red Hero) at which they could serve until too late in their careers. 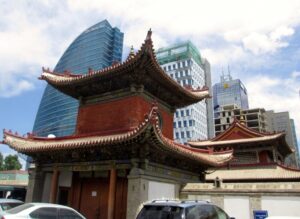 Fast forward into the 21st century, and the country had turned into a multi-party democratic country more quickly AND more peaceably than any other former communist state.  Fast becoming a major adventure-tourism destination with its vast steppes, deserts and high mountains, the country also produces fair trade handicrafts of the type sold in our shop.

Couple this with an invitation to visit from a friend working at the American Embassy there, Fred said, Mongolia here I come!  Sharon, on the other hand, decided that camping in blizzards on long mountain treks and eating boiled mutton best remain in her past. 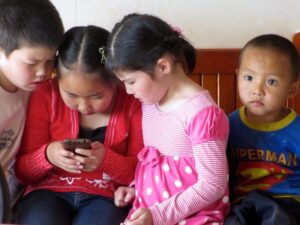 Fred spent most of June in Mongolia and was charmed by the quickly westernized, friendly, increasingly English speaking, internet-and-cell-phone wired, basketball loving, yet still nomadic-culture-embracing country of a scant three million people with 30 million horses, camels and yaks.

The contrast between the capital city crammed with half the country’s population and the worst driving habits in the world, and the countryside with almost no roads between towns (linked only by multiple tracks spreading across the steppes) was greater than any other country Fred has visited.  The urban-rural contrasts were many, some of which we can describe in later blogs. 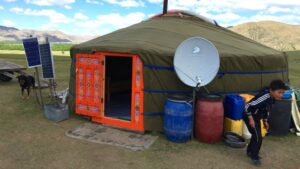 Satellite Reception and Solar Panels in a Ger. © Fred Lundahl.

The U.S.A. is just about the Mongolians’ favorite country.   The U.S. stepped in to assist with food aid during times of hunger and hardship after Russian aid–which had made up 1/3 of their GNP–stopped cold when democracy began.  In addition, hundreds of Peace Corps volunteers over more than two decades have taught English in the most far-flung villages across the country.  People remember that the U.S. helped them, and now most people under the age of 25 speak English.

Most amazing to see was that in virtually every location with two or more huts or “yurts” (“gers” in Mongolian), there would be a basketball court or half court.  Often the hoops had no nets, and the backboard was just rough planks, but kids would be out shooting baskets at all hours. 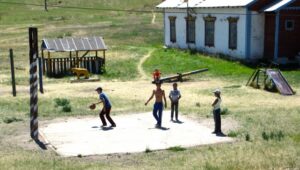 It seemed that every family living in a ger in the most remote location had a solar panel and a satellite dish.  The kids were often watching Sesame Street on Dish TV when you looked inside.  In a country where 50 percent of the population is under 35, all this education bodes well for the future.

The country is not without its economic problems.  Mongolia only allows western countries to be involved in exploiting their vast natural resources of coal, copper, and other metals from the land. 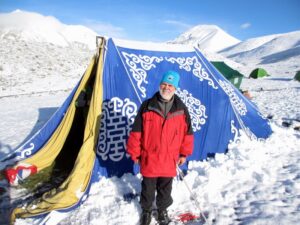 The Mongolians have, however, sometimes reneged on contracts and tried to re-negotiate with those international companies, causing economic uncertainty.

Climate change and harsh winters have killed vast numbers of livestock and have driven many families into spreading ger camps around the capital, leading to new social problems.

Still, you must admire their spunk.  The entire country seems to detest China, for both historic and contemporary reasons.  They are gleefully awaiting the first visit of the Dalai Lama to the only independent country that practices Tibetan Buddhism.  Proudly noting that the first Dalai Lama cam from Mongolia, and hoping that the next reincarnation might too, everyone seems to revel in the discomfort the Chinese government is exhibiting over the upcoming visit. 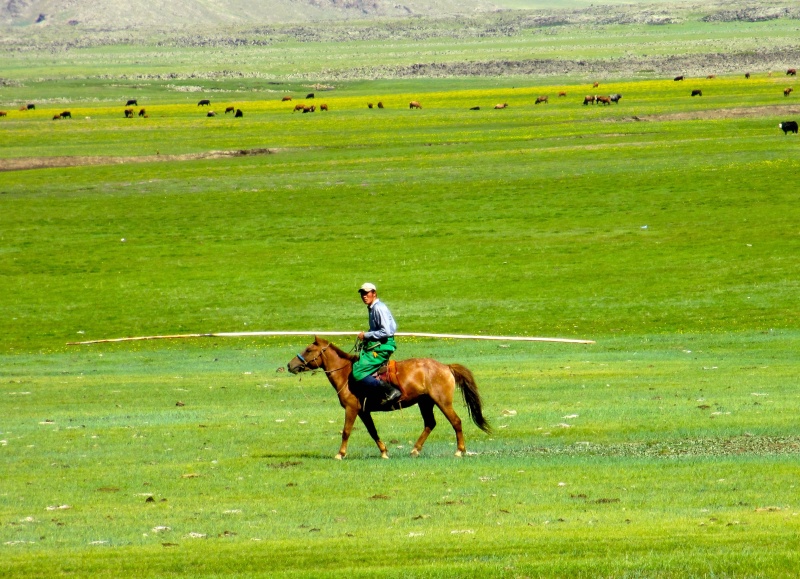 Hello Fred and Sharon,
Always enjoy the blogs that y’all are posting. The pictures and text are nicely balanced. Hope all is well at Music for the Eyes and that you both are healthy! We are starting a hat museum here in Fort Worth, Hats of the World, and I will send you the web site on opening.
Peace to you and yours,
Chris HatDoc Hull

Manchuria and Mongolia have always fascinated me. My dermatologist’s (who was born in Taiwan) grandmother fled Manchuria during the Japanese invasion. Perhaps one day I shall visit too. Enjoyed the photos. It is too bad most Americans do not travel, for one reason or another, to other areas of the world. Maybe one would be more appreciative and thankful of our blessings here in the USA.
Subsequent to watching a program about Mongolia I actually had a dream where I was riding my horse there; what that means who knows!
Will be looking forward to hearing more about this trip and hopefully seeing additional pics. Sandra

There was a blizzard in June? In that case, Sharon’s discretion was the better part of valor. Nevertheless, it sounds like a very interesting country that I would also have to visit without Joan. (I was once scheduled to go to Ulaan Baatar but the trip was cancelled at the last minute.) Hope you are both well. We are doing fine in a mild summer in Prescott. Cheers, Paul

Hi Fred and Sharon,
We visited Mongolia in the summer of 2013 along with daughter Christine to visit Gerry’s other daughter Joanne and spouse who at that time were teachers in the International School in UB. Gerry and Chris stayed in UB while Betsy went on an OAT trip visiting 3 sites remote from UB seeing both the north and southern areas. It was a wonderful trip to a very friendly, fascinating, and interesting country. I loved it.
Betsy

You write this some time ago, Fred, but it was still on my phone!! Asi sit waiting for a friend in a doctor’s office I am enjoying catching up on dated emails!

Hope you are both well and wondering where your NEXT adventure will be?!!

« Novia Scotia and the Cabot Trail
Driving in Mongolia »