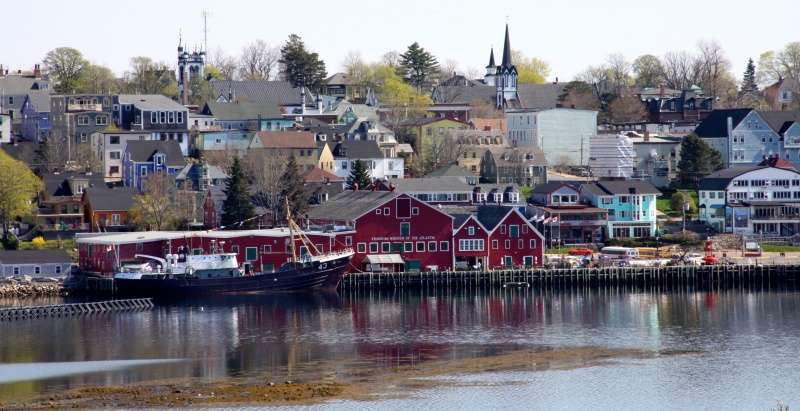 Mid-May was a great time to visit Novia Scotia.  We were there one week before a 24-hour relay race with 70 teams of 17 runners each…and the commencement of the tourist season. 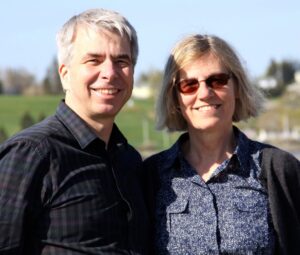 Andre and Leslie–Old Friends and Our Hosts in Quebec City. © Sharon Lundahl

We were also a couple of weeks before the onslaught of black flies, which takes place in June before the heat of the summer.  (While visiting Fred’s parents nearby in the state of Maine, we learned that the bites of black flies are something you want to avoid.)

Although we still saw banks of leftover snow from a hard winter, the weather was nice every day of our trip, and the tulips were blooming. 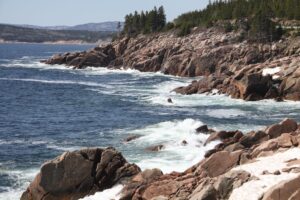 Snow in May on the Cabot Trail. © Sharon Lundahl

The Cabot trail is a scenic roadway built in 1932 and named after the explorer John Cabot.  The northern section passes through the Cape Breton Highlands National Park and follow the rugged coastline, with spectacular views of the ocean.

It is scattered with small villages, such as Pleasant Bay; Belle Cote; and St. Ann, famous for its Gaelic College of Celtic Arts and Crafts.  There were plenty of ethnic enclaves throughout the area.  Cape Breton, for example, has the “Ceilidh Trail”–the home of Celtic fiddle music.

We tried to visit Cheticamp, an Acadian fishing village famous for its hooked rugs and live fiddle music, but mostly things were just getting ready to open for the season.  We did see that even the sign in front of the Post Office in Inverness says “Canada Post” in Welsh. 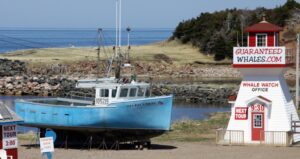 Whales are sighted in the Gulf of St. Lawrence from May until late November.  We didn’t see any, and the whale boats were not yet open for business.  It was a shame, because they advertise a high success rate viewing a high number of minke whales, pilot whales, and even humpback whales near the coastline. 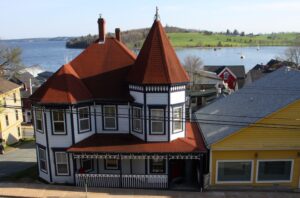 Our B&B in Lunenburg. © Sharon Lundahl

The difference in two versions of the same historical event was noticeable in Halifax, where we saw a large official historical display beside an old cemetery.  It read–“Why aren’t we Americans?  We are not Americans, thanks to the bravery and fortitude of the soldiers and sailors, all casualties of the American war of aggression of 1812, buried in this old burying ground.  These men fought and died successfully resisting the United States’ attempted invasion and annexation of our country.”  Eh? 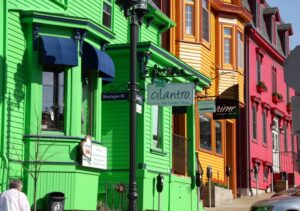 Probably the most beautiful town on our trip was Lunenburg.  Its old town has been designated an UNESCO Heritage Site–one of only two cities in North America given that honor.  The other is Quebec City.

The town of Lunenburg has a history of being an important seaport and shipbuilding center.  It has its own distinct dialect, 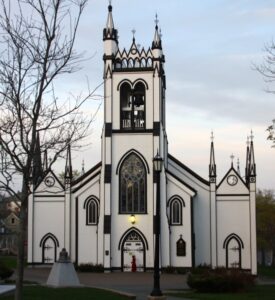 known as Lunenburg English, which is influenced both by New England English and by German.  Now it is full of galleries, restaurants and a renowned fisheries museum.

While we love Langley on Whidbey Island, and usually consider it the most beautiful place in which to live, the Maritime Provinces provide stiff competition…at least in the warm seasons.

That was an interesting view of the war of 1812. I visited the White House while they were painting the front columns. They had stripped off the old paint and could we could see where the fire had stained the columns in 1812. I guess there were some northern skirmishes. I know that my 4th great grand father fought in the war and he was living in upstate New York at the time.

Good Morning,
Have been meaning to tell you the morning you blogged Quebec and the Maritime Provinces, I was on the phone with Chris from Cape Breton Island; he was assisting me with a failed PC (am planning to purchase a Mac Pro in Jan so relieved that we were able to resolve some of the issues so it can hiccup along until then)

I always enjoy your sharings – find them quite educational and I am usually stimulated to explore further.

It has been HOT here for several weeks. Attended a wedding at the Wine Alliance Golf Course which is in the middle of a wheat field; view is beautiful.

Am heading to Seattle today for a few days; suspect the weather will be nice.

Why not stop in Whidbey Island? We are usually 5 degrees cooler than Seattle. Sharon

I always enjoy these blogs.

Sounds like a great trip. Even though I lived in Quebec 17 years, I never made it over to the maritimes; what a shame!

Maybe you need to make a trip back so you can see them like a tourist!
Sharon

« Quebec and Canada’s Maritime Provinces
Why Travel to Mongolia? »