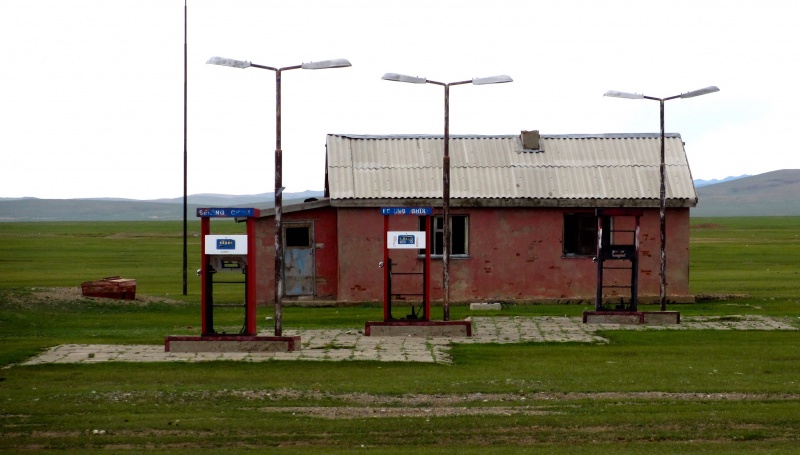 Fred loves train travel.  You meet an interesting cross-section of a population and get to peer into a country’s backyards as the train passes.  Wherever we go, we take train trips, and Mongolia was no exception. 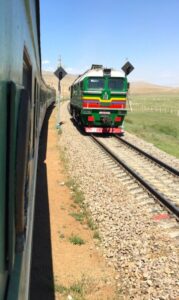 The vast country has relatively few kilometers of rail–all built for them by the Soviet Union.  Besides a few spur lines to mining towns, the only rail line in the country is the one that connects Beijing with Moscow.  The fancy Chinese spur to the Russian Trans-Siberian zips people straight through Mongolia, but Fred took instead the local that stops at every village along the way.

On the way north, Fred’s cabin companion was an elderly pistol-toting mine policeman.  He spoke no common language with Fred, and spent all of his time on a smart phone.  (Interestingly, there is cell coverage in a lot of the country.)

As Fred was the only foreigner on the train, people passing down the corridor always stopped to gawk and say hello.  Several of the young people had traveled and studied in the U.S.   The generational divide between English speakers and Russian speakers was especially apparent.  Virtually everyone under 25 spoke English, and most older people spoke only Russian.  A further reminder of the old days were the women in Soviet-style uniforms with big hats, while they were also wearing patterned tights and spike heels.

This trip ended in the city of Darkhan, where the Soviet-era buildings and art work were being quickly subsumed by huge billboards advertising American Express cards and Japanese cars…often in English.  A huge outdoor market was a fascinating mix of these old and new faces of the country.

During a stroll there, Fred noted two interesting Mongolian customs.  Women meeting female friends on the street often gave each other chaste, quick kisses on the lips in greeting.  Another interesting custom, noted by accident in a restaurant, is the requirement to shake hands with someone whose foot you accidentally touch with yours under the table. If anyone can explain the origin of these two practices, please let us know. 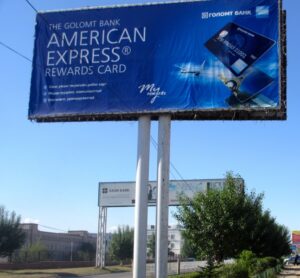 The scenery along the rail line was also interesting.  There were no roads–only tracks in the grass connecting the settlements, and it was odd to see gas stations in the middle of grasslands.  The small villages where the train stopped bristled with satellite dishes and cell towers…and basketball courts with kids shooting hoops.  Villages that once would have glorified communist heroes now sported basketball mascots. 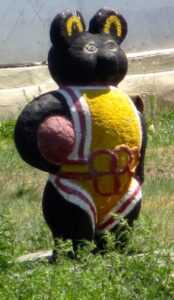 On the way back to Ulaan Bataar, the train was suddenly overwhelmed at one stop by a couple hundred young boy and girl scouts returning from camp.  Every scout who stuck his or her head in Fred’s compartment spoke English.  Interestingly, for a country whose official writing script is the Russian Cyrillic alphabet, all the rank, merit badges and troops’ insignia on these kids’ uniforms were in English.  With their baseball caps and uniforms identical to scouts in the U.S., it was an amazing sight.  It was even more fascinating to realize that the parents who came to the train station to pick up their children  would have worn red “Young Pioneer’ kerchiefs and Lenin badges when they were young. 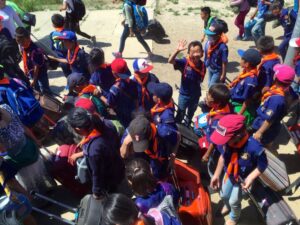 One odd thing about the Mongolian rail system is that the gauge or width of the track is the Russian standard rather than the Chinese standard, which requires that every rail car crossing the Chinese-Mongolian border be lifted off its Chinese wheels by a crane and placed on Russian/Mongolian wheels.  China, hungry for 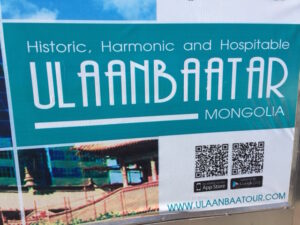 Mongolia’s natural resources, has offered to build the country a whole new set of rail lines for free on the Chinese standard.  This would, of course, facilitate the Chinese export of Mongolia’s mineral wealth.

Mongolia, unlike most countries in the Third World, has said, “No thanks.”

Mongolia is a country that tore down its Communist-era statues and erected a memorial to the Beatles, joking that they had simply replaced one Lenin for another Lennon.  You gotta love them. 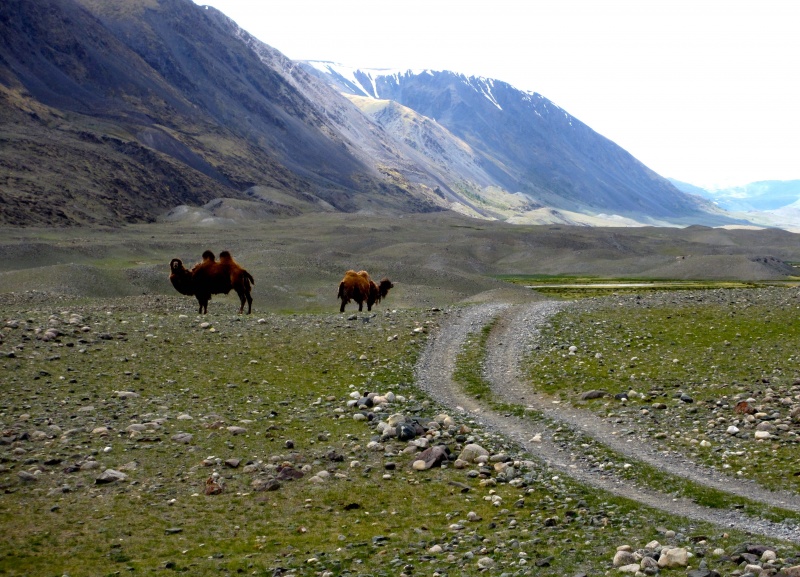 Thanks for the great input on Mongolia..I do hope to get there some day soon and travel along the old Silk Road. Best Regards, Ned Mueller

Mongolia has suddenly become,
like friendly neighbors, “more accessible”. Love your accounts of your travels, thank you for sharing

This is really great, Fred! You are opening my eyes to new possibilities as I think of traversing Mongolia. We need to have a loooong talk.
Thanks so much, Meg

Love all of your travel stories, Fred.

Hi Fred,
I enjoyed this story of your adventure in Mongolia on the train and realize how many things we take for granted like the standardization of rail travel in the United States. You are the consummate adventurer and exotic lands traveler. Your writings are enjoyable to read and take you right into the experience. Thanks for all you do in Langley.
SIncerely,
Fred

Love your stories, Fred, and your observations of everyday life. I’m curious about the food you encountered in Mongolia. Popular dishes? Was there any grilling? Hope to see you next summer. SR

Love your observations of everyday life. I’m curious about the food you encountered in Mongolia. Popular dishes? Was there any grilling? Hope to see you next summer. SR

I’m curious how the Mongolians navigate. We have innumerable road and street signs and now GPS) to help us reach our destinations. What do they use to reach a gas station in the middle of the plains?

Fred, I really enjoy the way that you suck the reader into your experience with the photos and text. Feeling like I have had a taste, I really want to go there too. HATS OFF to you!
HatDoc

Hi Fred:
Thanks for the sharing the feel of the places you visit through both photo and text. I can just picture you attempting to engage with your pistol-toting cabin-mate….

I love your innate curiosity and your sense of exploration and adventure. Thank you for inspiring the same in the rest of us!

What a fine piece on the changing Mongolian scene. It makes me want to take up train travel again. Thanks.

« The Far Corner of Mongolia
Why Patagonia? »