Islamabad has always been one of our favorite capital cities.  The construction of a new capital was begun in the 1960’s in order to reflect the diversity of the new Pakistani nation.

Set against the backdrop of the Margallah Hills, the city was planned in huge open space grids with evocative place names like F-6, G-2, etc.  In a country filled with crowded cities with teeming bazaars, Islamabad was always a contrast and a breath of fresh air.

Its wide tree-lined streets made it especially beautiful.  Government buildings, foreign embassies, universities and mosques were laid out on spacious plots with lots of gardens.  Market areas were packed with shops, of course, but there was plenty of parking and lots of open parkland around. 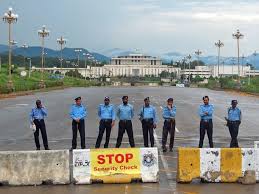 In the old days, we hung out at carpet shops and wonderful book stores where modern hardback reprints of old 19th century histories and travelogues could be purchased for three or four dollars.  On weekends, when we weren’t hiking or biking in the hills overlooking the city, we could go to open air markets and buy wonderful handicrafts and rub shoulders with all sorts of people.

Sadly, that Islamabad seems to be gone.  On this trip, some of the wide boulevards were blacked off with huge steel shipping containers denying access to entire sections of town, often where foreign embassies are located.

Now the largest employers seem to be security guard companies.  You can see countless men in

Bilal, our Rug Supplier from Lahore, who showed us around.

uniform going to their guard jobs on scooters with machine guns slung over their shoulders.  These days companies making barbed wire and concrete barriers–both always in view–seem to be more successful than carpet makers.  Just getting into the lobby of the Serena, our five-star hotel, required four separate security checks.

Once inside the Islamabad Serena, you seem to be in another world.  Nested on fourteen acres of land and gardens, the hotel was built by the Aga Khan, to provide an oasis of beauty.  During our former trips, this premier hotel in Islamabad was full of Americans, many of whom were on temporary duty to or visiting the U.S. Embassy.  This time we only saw one American, a professor, during our stay at the hotel.  The few foreigners in sight were limited to mostly mountain climbers waiting, like us, for clear weather to fly to the high peaks in the north.

The American Embassy, which numbers over one thousand American employees, now houses all on the Embassy compound.  It has filled all its gardens and softball fields with trailers as residences.  There are strict restrictions on travel outside the embassy because of security.

When we were out with Pakistani friends shopping or eating in restaurants, we NEVER saw another westerner.  In museums, which used to be full of foreign tourists, they turned on the lights for us.  We were the object of curiosity to groups of children on field trips, who were not used to foreigners.  They left on their school buses, each armed with the guard carrying the ubiquitous machine gun.

Each day we returned to our hotel to find that the flight to the mountains had once again been cancelled by bad weather…or by finding we were not next in line for the few available seats.   There was just one daily flight to Hunza in a propeller plane to the 12,000 foot landing strip, and the view had to be clear to fly.

The fallback plan had been to drive to Hunza, which took about 20 hours…if there were not any landslides.   Clearly, we did not want to drive through Taliban territory in Waziristan, and so decided to cut short our trip and return home.

When we travel we always use the free online “Smart Traveler Program” run by the U.S. government to register when and where we will be in case of emergency.   As we had left Pakistan early, we were in our shop on Whidbey Island when our phone range with the “Amber Alert” text sound.  The message was a warning from the Embassy in Islamabad to all Americans in light of the bombings at F-6 (our favorite hang-out) the night before.

on my. Well, even though you did not get to your destination, you had some kind of adventure! It’s sad to think of how narrow-minded thinking is affecting our world and, indeed, our country. I tell people to travel now before all is changed 0- either by extremism or by the rising middle class that will demand McDonald’s (over street food), department stores (over open markets), etc. Your time reminded me on my being “stranded” on Maui on 9/11 – all flights out and in canceleed for the better part of a week. Marooned in paradise, yet feeling sadly strange and disociated – we all wanted to be back with our families. The hotels did well – moved TVs into the lobbies, etc – but I felt sorry for the budget-minded honeymooners who had planned for only a day or two decluxe before returning to the states.

How descriptive, thanks for the pictures and narrative. I would say that Islamabad has changed greatly from when we were there in the late 80’s. What a shame!

appreciate the way u describe both in text and pics. A good comparison between the Present and Past which was really interesting for my teenager sons.
Although It makes me sad that u were not able to made the trip to Hunza, yet it was more than a pleasure to see u in Islamabad.
I believe that a day will come when everything will be all right and Islamabad be worth visiting place as was in the Past.

Thanks for showing your travels. Your perspective adds to photos of ‘real’ people living in this part of the world. I hope calm returns so the art and charm of these people may be more easily shared again.

« Getting There is Half the Fun– MuslimMingle.com
Hunza: the Inspiration for Shangri-La »