Along the coast of Novia Scotia. © Sharon Lundahl

We traveled recently to Quebec City to visit friends who teach there at the University of Laval.  We also planned a road-trip with them to parts of Atlantic Canada, the ocean-bound northeastern corner of North America, which is comprised of four provinces with their own personalities. 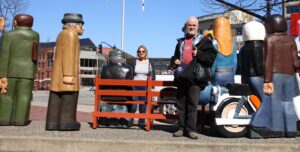 Fred with Friends and Statues in Saint John. © Sharon Lundahl

Our trip explored two of those provinces–New Brunswick and Nova Scotia.  New Brunswick is mostly forested with beautiful beaches and the three cities of Fredericton, Saint John and Moncton.

Nova Scotia has the big seaport of Halifax; the postcard-perfect seaside town of Lunenberg (according to our B&B owner, quickly becoming a wedding destination); and the hiking paradise of the wilds of Cape Breton Island (which will be addressed in our next blog.) 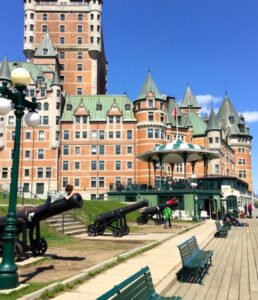 We loved old town Quebec with its classic buildings and monuments which feel somewhat European.  It has many parks like the wonderfully named “Plains of Abraham” where both English General Wolfe and French General Montcalm were killed in the British takeover of the city.

Still, centuries later it is clear who really won:  We remember years ago when the Quebec license plates said, “La Belle Province.”  Somewhere along the way the inscription changed to a line of poetry, “Je me souviens,” (I remember)…but they really mean, “Don’t you ever forget we’re francophone!”

Having spent a year of her youth studying in Grenoble, in France, Sharon was really happy to try to speak French.  With the combination of the Quebecois accent, the modern slang, and the years since her study, it was not easy. 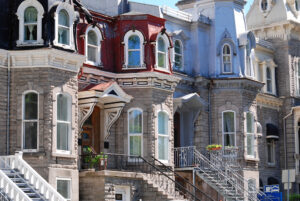 Taking off from Quebec, we found a convenient stop in Fredericton in the Saint John River valley.  It is one of the country’s oldest settlements, dating since the late 1600’s.  With its small size of 50,000 people, Fredericton was easy to manage on foot, and we explored the downtown area along its pretty river.

Various European peace treaties in the area resulted in the swapping back and forth of huge tracts of Canadian territory and resulted in, among other tragedies, the infamous deportation of the French “Acadians” in the mid-1700’s.  You might know 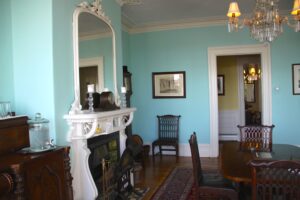 A Typical B&B Room on our Trip. © Sharon Lundahl

Longfellow’s famous poem about separated Acadian lovers, “Evangeline”.  Interestingly, many Acadians managed to sneak back into the area over the following years.  Especially in New Brunswick, we saw just about as many Acadian flags (French tricolor with a gold star) as we did Canada’s maple leaf.

The Acadian coast might be described as a French-flavored seaside of ports, beaches, sand dunes and rocky coastlines. 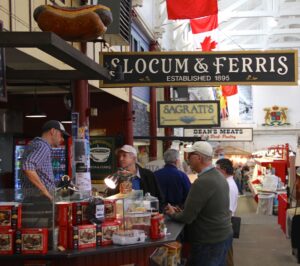 Saint John is the province’s largest city and major port at the midpoint, and to either side the coastline is sparsely inhabited and mostly wild.

In Saint John we were mistaken for the first of the season’s cruise ship visitors because of Sharon’s large camera.  From Saint John, we took the ferry to Digby, ready for our adventures in Nova Scotia, subject of our next blog.

Sounds like a fun trip! Just returned last night from basing in Presque Isle Maine, spending two weeks doing aerial survey of forest land in New Brunswick and Nova Scotia. Did not see you guys down there, but I was flying pretty high! Cheers! Chris & Bebe

Hi Sharon,
I love the silhouetted laundry photo!
See you guys in a couple of weeks when I drive up from Portland.
Cleo

« Hungary and American Football !
Novia Scotia and the Cabot Trail »